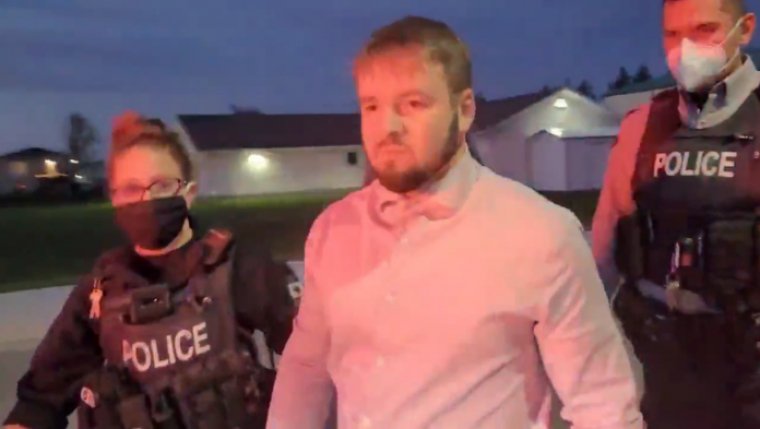 WINNIPEG - A leader for a southern Manitoba group involved in protesting the province's public health orders has been released from custody following his arrest in connection with events where police say those orders were broken.

The Church of God Restoration says Tobias Tissen, minister for its congregation in Sarto, ten minutes south of Steinbach, was arrested Monday night on an outstanding warrant. The organization says the warrant was related to Tissen’s helping organize public gatherings that violated provincial rules limiting gathering sizes. Court records say the incident in question took place on May 15.

RCMP Sgt. Paul Manaigre says Tissen, who is in his 20s, was arrested during a traffic stop in Steinbach. Tissen was kept in custody overnight before being brought to the Winnipeg Remand Centre, then spent another night in jail after refusing to sign conditions of release on Tuesday that included agreeing to follow all public health orders. "They had these conditions that I wasn't allowed to attend any gatherings that were in contravention of COVID-19," Tissen told Fox News Network. "And that would automatically prohibit me from going to church and preaching."

In fact, Tissen would have been allowed to attend and speak at faith-based gatherings: Current public health orders did permit such gatherings, with indoor group sizes allowed for up to 25 people or 33 per cent capacity, whichever was greater, when they include people who haven't been immunized against COVID-19, or unlimited capacity when those in attendance have been vaccinated. But Tissen's congregation of less than 200 people has been fined tens of thousands for openly breaking various health orders as they've changed, potentially facing fines of up to $1 million after multiple infractions and fines of $5,000 each were brought to court for a judge to decide on an additional penalty.

On Wednesday morning, Tissen agreed to similar conditions and to pay $1,000 in bail. During the brief Wednesday hearing, Tissen promised to attend court when required, notify the court of any changes of address, refrain from contacting five people, and not organize or "incite" gatherings of any size in connection with public health orders. Tissen also promised to pay another $1,000 if the conditions are broken. The conditions specify that Tissen has a right to attend services and perform his duties as a minister for the group, including speaking at their weekly meetings. The following Sunday, Tissen spoke during a "Walk for Freedom" protest in Winkler, opposing COVID-19 mandates.

The Manitoba congregation's new leader, Heinrich Hildebrandt, says he’s asking adherents to pray that Tissen would find wisdom. Taking to social media to address police and those criticizing leaders for breaking rules, Aylmer, Ontario Apostle Henry Hildebrandt, who oversees Canadian congregations for the Ohio-based group, warns they could one day be arrested themselves. “Mark my word,” the elder Hildebrandt says, “Today it’s the pastors, tomorrow it is you.” Henry Hildebrandt is one of 11 international leaders who are considered apostles by the group, down from 12 following Steinbach-area leader Jacob Braun's removal as apostle after audio of Braun criticizing Restoration doctrine surfaced in early 2020, which former members say caused a rift in the congregation. Heinrich Hildebrandt was then ordained as their pastor, while Tissen remains a minister under the lead pastor's authority.

Tissen was one of six who were the subjects of warrants issued in May, including Ontario activist Chris Saccoccia and other organizers of rallies that attracted hundreds. After the warrants were issued, Tissen posted a video saying he wasn’t going to turn himself in. He arrived at his congregation's meeting the following day, saying he planned to make it hard for police, and that he had gone into hiding to be there. Heinrich Hildebrandt has since taken the role.

The Church of God Restoration was among several rural Manitoba religious organizations, churches, and individuals that lost a court challenge that began in December 2020 of the public health orders. On October 21, just three days after Tissen's arrest, Chief Justice Glenn Joyal declared the orders reasonable and constitutional, ruling that they do not violate charter rights in their full context, and that Chief Public Health Officer Dr. Brent Roussin can lawfully impose limitations that help protect the public from a pandemic.