Manitoba NDP 2020 Campaign Could be for Higher Taxes 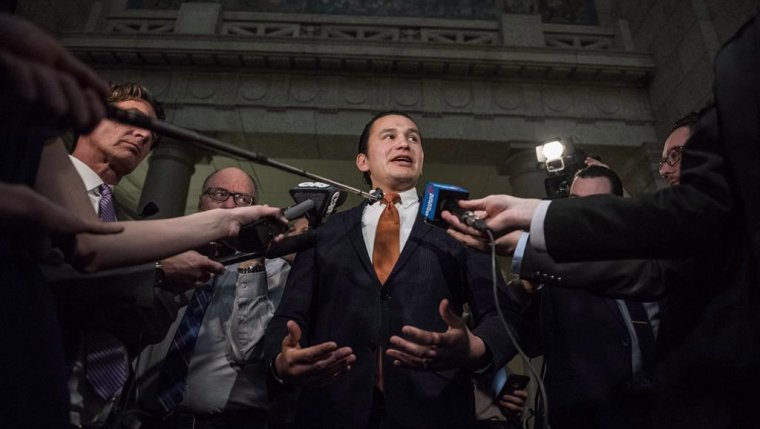 BRANDON — Manitoba’s Opposition New Democrats appear set to campaign on higher corporate and personal income taxes in the next provincial election, promoting the idea as an alternative to the Progressive Conservative government’s cuts to health care and other services.

NDP Leader Wab Kinew said details of the campaign platform will be worked out closer to the election slated for October 2020. But in an interview with The Canadian Press at his party’s annual convention on the weekend, Kinew said he was eyeing raising taxes on high−income earners and large companies in order to preserve government programs.

"The details of what exactly we’ll be proposing, I think, will be released as we get closer to the election. But broadly speaking, I think most Manitobans understand that for those people who are low and middle−income, the government should be there to help. And for those of us who have been lucky ... part of being a successful person means giving back."

Former NDP leader Greg Selinger angered the electorate when he raised the provincial sales tax to eight per cent from seven in 2013. He lost the next election in 2016.

Kinew, who was elected leader last September, said he feels the public appetite has changed now that the Tories have been in power. He pointed to the recent move to close three of the six hospital emergency rooms in Winnipeg.

"I think there is an understanding in the public, after seeing the cuts," he said.

"To me, there is an appetite for a mature discussion around government services. People seem to oppose a lot of the cuts to services, and so I think that in having an honest conversation, we can explore other options."

Kinew was first elected in the 2016 election, when the NDP campaign included a plan to create a new, higher tax rate for individuals earning more than $170,000 a year.

The tax would have affected fewer than two per cent of Manitobans and raise $52 million annually — less than 10 per cent of the current deficit.

The governing Tories have already started to try to make taxes a main issue in the 2020 election. They have promised to cut the provincial sales tax back to seven per cent in April of that year, months before hitting the campaign trail. The tax cut is likely to be outlined in the budget, and the opposition would have to decide whether to vote for or against it.

Kinew said it’s too early to say how he will vote on the tax cut. But he said he is also aware that former NDP leader Gary Doer broke with tradition as Opposition leader in 1999 and voted in favour of a Tory government budget. Doer won the ensuing election.

"I just think a sales tax is a more regressive form of taxation. What that means is it impacts lower−income folks more."