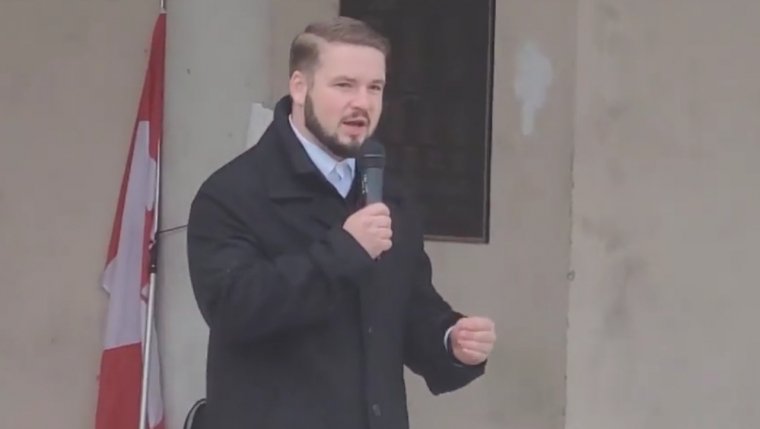 WINNIPEG - Just days after being released on bail following an arrest for allegedly violating public health orders, a leader for a southern Manitoba group that lost a court challenge to those orders was seen speaking at multiple protests.

Last Wednesday, Tobias Tissen, minister for the Church of God Restoration, ten minutes south of Steinbach, paid $1,000 in bail and promised not to contact five people or organize or “incite” gatherings of any size related to health orders. The conditions specify Tissen is free to perform his duties as a minister, including speaking at the group’s weekly meetings.

On Saturday, three days after his release, Tissen was seen at an anti-mask rally at the Legislature, then spoke during a "Walk for Freedom" health order protest in Winkler on Sunday.

RCMP say Tissen was arrested last week Monday on a warrant in relation to gatherings this spring that attracted hundreds, violating provincial rules at the time. Tissen initially refused to sign release conditions that included agreeing to follow public health orders, but agreed to similar conditions the following day. Tissen told American reporters the earlier conditions not allowing him at gatherings “in contravention of COVID-19” would automatically prohibit him from going to church and preaching. In fact, health orders do permit faith-based gatherings of 33 per cent of building capacity or 25 people, whichever is greater; or unlimited capacity when all attendees have been vaccinated.

But Tissen's congregation of under 200 has received numerous fines after months of health order violations. The group is among several that lost a court challenge this past Thursday, the day after Tissen’s release from jail. Chief Justice Glenn Joyal ruled the orders were reasonable, constitutional, and did not violate charter rights, and that the Chief Public Health Officer can lawfully impose limitations to protect public health.