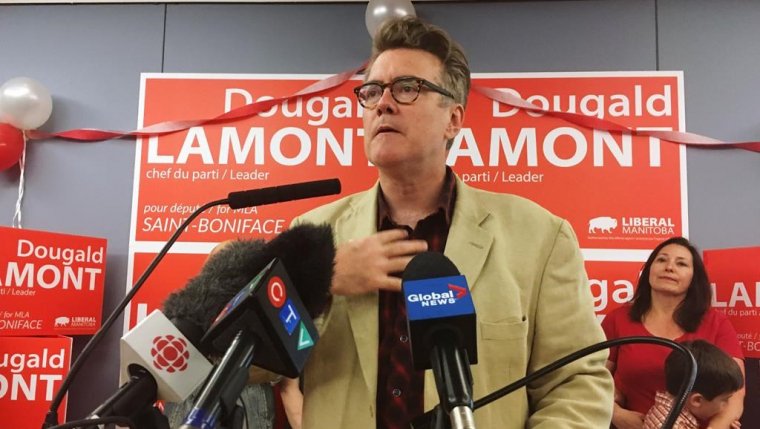 WINNIPEG — Manitoba Liberal Leader Dougald Lamont says he intends to fight the Progressive Conservative government’s cost−cutting agenda and push for public spending to stimulate the economy and reduce the deficit.

The former political staffer and small business owner, armed with a new legislature seat and more clout for his party, also wants a review of taxes and believes people are sometimes willing to pay more if the money is well used.

"There are all sorts of things we could do to make the tax system more fair to generate revenue," Lamont said in an interview shortly before he was sworn in at the legislature Friday. "There’s a lot more to it than the PST (provincial sales tax)."

He didn’t give any examples of what he called "smart taxes," but said the main thing "is that they should be progressive ... where everybody pays their fair share.

"I don’t think that’s been happening for a long time."

Lamont, 49, was elected Liberal leader last fall. His byelection victory earlier this month in the St. Boniface constituency has given the Liberals a fourth legislature seat — enough for official party status and the extra funding that comes with it.

It’s the first time the Liberals have had official status in the legislature since 1995 and they may find themselves getting some of the public and media attention the official Opposition New Democrats have had.

One political analyst says if the Liberals can keep up the momentum — which will require them to raise more money and get a lot more volunteers and supporters provincewide — the opposition vote could be split in the next election in 2020.

"It’s good for the Tories if they can split the left or centre−left vote," said Royce Koop, head of political studies at the University of Manitoba.

The Tories were elected in 2016 on a promise to rein in spending, end almost a decade of NDP deficits and reverse the NDP’s 2013 increase to the provincial sales tax.

Lamont has a long−running blog in which he frequently criticizes spending cuts as a way to cut red ink. Some of his posts suggest the province’s financial woes have been caused by previous tax cuts, not by overspending.

"Credit agencies said that because the government had a strong majority, it would be able to do what it needed to to address the deficit, including raising taxes," one post reads.

"This might seem unpalatable, but if shrinking the deficit because people are worried about debt is what people want, it should be on the table."

Lamont said it’s too early to say whether he will vote with the Tories if and when they introduce legislation to cut the sales tax — something the Tories have promised for the spring of 2020.

He said the NDP’s sales tax increase of 2013 might not have angered the public so much had it not gone directly against the party’s campaign promise two years earlier.

"But you have to be straightforward with them."