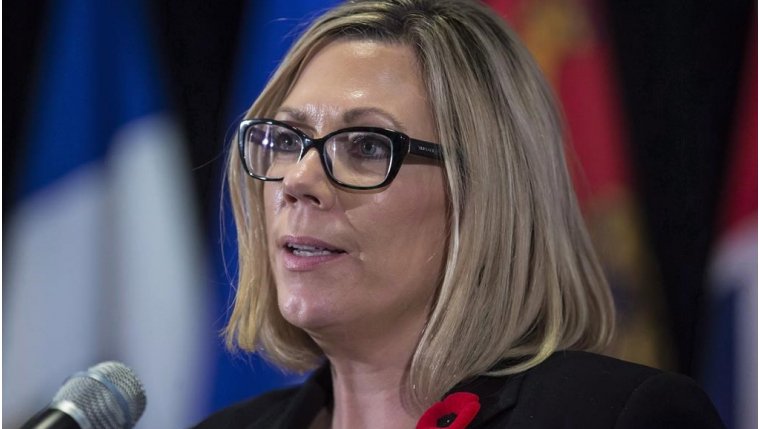 WINNIPEG — The Manitoba government moved closer Monday to charging a carbon tax on a handful of large emitters in the province.

The Progressive Conservative government released a discussion paper that eyes a price of $25 per tonne on industrial facilities with annual emissions of at least 50,000 tonnes of carbon dioxide equivalent.

The government plans to set targets for each emitter, following consultations through September, and charge the tax only on emissions that exceed that amount.

Companies that produce less than their target would get credits that could be traded, and the target would be reduced slightly every year.

"We will be setting a benchmark that will be reflective of our goals in Manitoba, which is to ultimately reduce the amount of carbon we put into the atmosphere," said Sustainable Development Minister Rochelle Squires.

The output−based system would only apply to six large companies, including Koch Fertilizers and Trans−Canada Pipelines. Municipalities, landfills, schools and hospitals would be exempt.

The government is seeking input on its plan and has asked for feedback via its website by Sept. 30. The discussion paper offers options on several issues, such as whether an emitter’s target level should be based on their historical output or the industry average.

The Opposition New Democrats criticized the plan as weak, given the exemptions for landfills and other operations.

"They are letting the largest emitters off the hook completely, while offering no new programs to help all other Manitobans avoid the impacts of their upcoming carbon tax," NDP sustainable development critic Rob Altemeyer said in a written statement.

The government is also planning a previously announced, $25 per tonne carbon tax on gasoline, diesel, propane and natural gas at the consumer level.

The consumer carbon tax also has large exemptions, including marked fuel for farming, forestry and mining. The government plans to offset that levy through reductions in other personal taxes, but the New Democrats have said the money should go to help consumers adopt energy−efficient technology.

The carbon tax was supposed to take effect next month, but the legislation enacting it was pushed back by the New Democrats and is now expected to come into force in December.