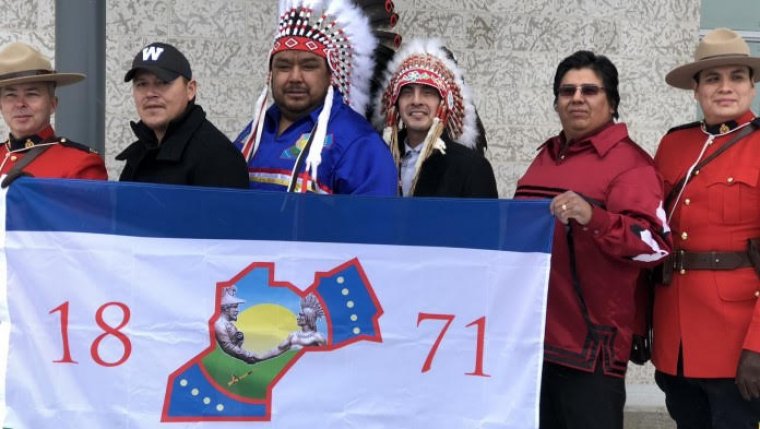 WINNIPEG - Manitoba is marking the 150th anniversary of the signing of Treaty 2 this weekend by flying the Treaty 2 flag at Memorial Park, with Manitobans invited to take in plenty of local artists at a celebration in Wasagaming, a community on Treaty 2 territory along the southern shores of Clear Lake, nearly 100 km north of Brandon.

Treaty 2 was signed between seven area chiefs and 12 representatives of Queen Victoria on August 21, 1871 at the Manitoba House Fur Trading Post on the west shore of Lake Manitoba. Indigenous Reconciliation and Northern Relations Minister Alan Lagimodiere says it’s important that all Manitobans look at the anniversary of the event as an opportunity to share in the province’s commitment to advancing reconciliation.

“Honouring the treaty relationships is based on the recognition of rights, respect, co-operation, and partnership,” Lagimodiere says. “Honouring this relationship is just as important today as it was 150 years ago, and reconciling what has happened between then and now will put us on the path to a stronger Manitoba comprised of vibrant communities and thriving individuals.”

The province says it’s important to respect the agreements made on treaty lands, and work in partnership with First Nations, Inuit, and Métis peoples in the spirit of reconciliation and collaboration. Communities that are part of Treaty No. 2 include Brandon, Dauphin, Melita, Minnedosa, Roblin, Virden, and more. The First Nations that negotiated and entered into Treaty No. 2 include Dauphin River, Ebb and Flow, Keeseekoowenin, Lake St. Martin, Lake Manitoba, Little Saskatchewan, O-Chi-Chak-Ko-Sipi, Pinaymootang, and Skownan.

Treaty 2 land spans 8,676,828 hectares of land, including Riding Mountains, Duck Mountains, Turtle Mountains, Hecla, Grindstone and Moose Mountains. It’s north and west of Treaty 1 territory, from the east shore of Lake Winnipeg, across the centre and southwest of Manitoba to the Moose Mountains in Saskatchewan.

The Treaty 2 gathering takes place at the Anishinabe Sharing Lodge in Wasagaming, and organizers say there’s no admission fee, and people from all backgrounds are welcome.