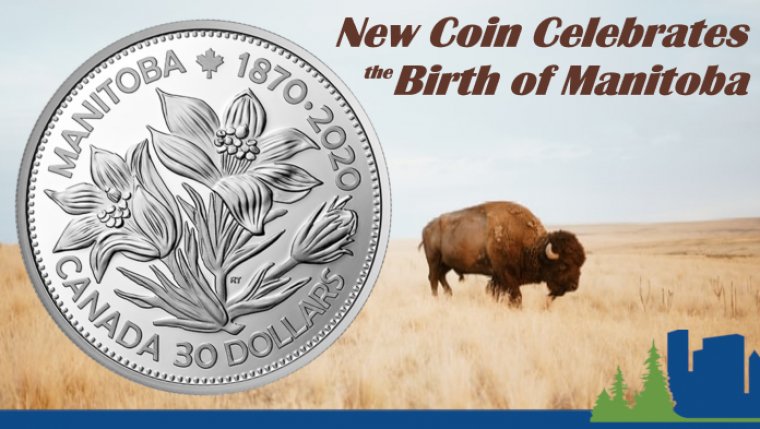 WINNIPEG - On one side the coin is graced by a hearty prairie crocus, Manitoba’s official floral emblem, and a perennial first sign of spring on the prairies. On the other, an effigy of Queen Elizabeth as she appeared in 1964, surrounded by laser-engraved Manitoba 150 heart logos. Although the face value of the 63-gram, five cm-wide silver coin is $30, it’s priced at $199.95.

The Mint had planned to have the coin released last year, not only to celebrate Manitoba 150, but to also celebrate the state-of-the-art plant in the province's capital city. The Mint facility in Winnipeg one of the largest and most versatile in the world, where every single one of Canada's circulation coins have been produced since 1976. Ironically, like all Canadian collector and commemorative coins, the 2,500 Manitoba 150 coins were struck one by one at the Mint's original home in Ottawa.

Manitoba turned 151 years old this past week, marking the anniversary of the Manitoba Act, which paved the way to the province’s entry into the Canadian Confederation as the only province to join confederation under Indigenous leadership.

Happy Manitoba Day! May 12, 2021 marks the 151st anniversary of Manitoba joining confederation. Learn more on the origin of the name of our beautiful province at https://t.co/UnXGOVikGn. #ManitobaDay #StaySafe pic.twitter.com/9VpHkb3QX8
— Manitoba Government (@MBGov) May 12, 2021

Acknowledging the challenges faced by Manitobans, the Manitoba 150 Host Committee says of the collector coin’s symbolism, “Just as the crocus bursts through the soil each year after a typical prairie winter, to thrive and bring the promise of a new day, so too will Manitoba face the future with hope, resilience, and a spark of joy.”