Looking Danger in the Eye 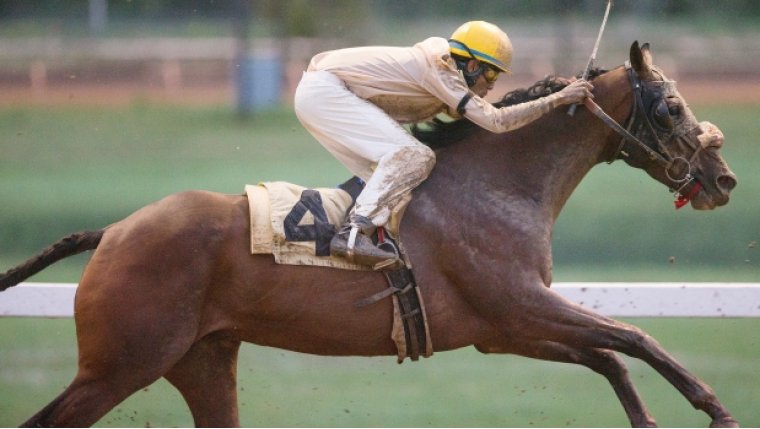 WINNIPEG - So here’s the deal. You weight 120 pounds, you’re riding on a 1,000 pound animal going 30 miles per hour with six other rider/thoroughbred combinations around you.

It’s a frightening thought. Imagine what it’s like to be in the middle of it.

However, for the men and women who make up the jockey colony at Assiniboia Downs, it’s just another day at work. It isn’t easy work, but it’s certainly thrilling and if you become a big winner like Rohan Singh or Adolfo Morales, it can be rewarding in many different ways.

Still, most jockeys are grinders. They gallop horses in the morning, look for good rides in the afternoon and spend all their time watching their weight and getting ready for the next race.

For 28-year-old Downs jock Stanley Chadee, injuries and danger are just part of the routine.

“And we have to ride to make money. We don’t have contracts like hockey players or soccer players. If we don’t ride we don’t get paid. If you’re hurt, there is some insurance money but it’s not the same. The broken collarbone set me back. And business-wise, when you go down, it effects your work. You come back and you have to start all over again (getting mounts). Somebody has already replaced you.

“The track here is pretty good. I get about five rides a night. Last year, though, I didn’t have an agent and came riding for Jaime Hartman. This year I have an agent, Carl Anderson, so I’m hoping I do better with an agent.”

Last season, Chadee’s first at Assiniboia Downs, he had a solid season. He finished 10th in the jockey standings with 16 wins, 20 seconds and 12 third-place finishes ion 131 mounts. He won $151,942 for his owners.

Not bad for a first year rider at the Downs and definitely not bad for a young man who followed his cousins to Marquis Downs in Saskatoon and moved up to a bigger, faster, more competitive track last season.

“I had an opportunity to ride when my cousins first came here and there were other guys from Trinidad so I started in North America at Marquis Downs,” Chadee explained. “There wasn’t much to it. My cousin asked me if I wanted to come and ride in Saskatoon and I said I’d give it a shot. And I loved Saskatoon, but I thought it would be better for me if I moved here.”

Chadee, who works to keep his weight between 115-120 pounds, came from a racing family in Trinidad.

However, he didn’t decide that he wanted to become a jockey until he was a teenager.

“I started riding at the age of 14,” he said. “My dad had stopped training by then and while my uncle was still training, I wasn’t always around horses. My cousin came along and he was riding and everything about him was ‘Horse, horse, horse.’ I would be with him and he always talked about horses and he said to me that I should ride so I decided at 14 that I would try to be a rider.

“But I didn’t tell my dad, I told my mum. I said, ‘Mum, I want to learn to ride a horse.’ Then I told my dad and he never wanted me to be a jockey because he knew how dangerous it was. But my mum said, ‘It’s in his blood. You can’t stop him. If that’s what he wants to do, that’s what he’s going to do.’ So my dad said OK and he bought a horse and got me up and I learned to ride with my dad. My dad taught me everything.

He’s not away from his family for too long. He does race in Trinidad during the winter and so basically works 12 months of the year.

“It’s just go, go go,” he said. “But I really like it here. Winnipeg has a good track with great people. I’m looking forward to the new season.”