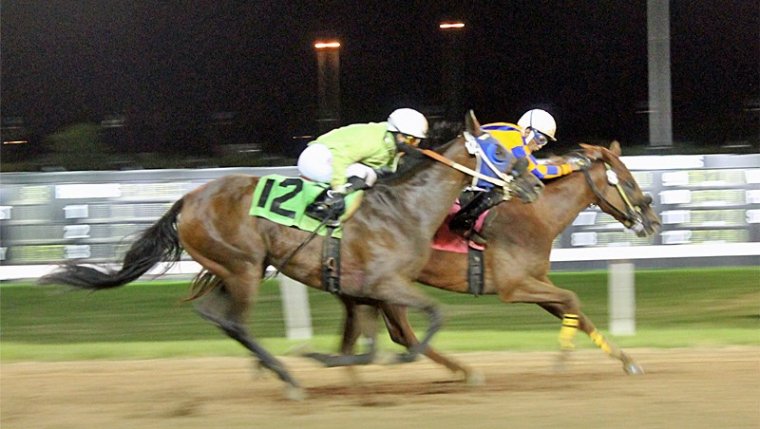 Adolfo Morales rides a lot of stakes winners at Assiniboia Downs. Of course, he was the local jock on Escape Clause so that covered many nights in the winner’s circle.

On Wednesday night, however, Morales brought a longshot to the wire, Queen Jean, a stunning winner of the $25,000 R.C. Anderson Stakes, a big Manitoba Oaks preview for three-year-old fillies.

This was a shocker. An 18-1 shot, Morales had Queen Jean way back in the early going, but took her outside and advanced to the final turn. That’s when she rallied and beat second-place finisher, Vallentay with Prayven Badrie aboard, by a neck.

It was a tremendous win for Morales and an even bigger win for trainer/owner Shelley Brown and her ownership partner Larry Falloon. Queen Jean paid $32.80 to win, $15.90 to place and $9.30 to show. Vallentay, which went off at 8-1, paid $7.60 to place and $5.00 to show, while Manitoba Dancer, at 40-1, paid a whopping $13.30 to show. The favorite, Amaretto with leading jockey Antonio Whitehall in the irons, went off at even money and finished ninth. Amaretto, which is trained by the brilliant and successful Don Schnell, was the most experienced filly in the race and she won her last two starts: The Hazel Wright Sire Stakes and a $5,000 maiden race.

It was a shocking outcome, but it was also a crazy race in another sense. The R.C. Anderson Stakes is one of the most important filly races of the meet and was supposed to go to post last Saturday night. However, according to the Downs’ Ivan Bigg, “An administrative error on the eligibility of a horse to race in the Anderson Stakes back on Saturday prompted the Manitoba Horse Racing Commission to cancel the race and hold it over to tonight with the correction in place. Guy Kling’s Manitoba Dancer and Jamie Hartmann's Honour Class were entered in the race to give it a full field of 12.”

The Manitoba Oaks, the big $30,000 filly championship race on Aug. 3, now has a wide-open field of half-a-dozen contending local females. It will be one heck of a race.

There is a stakes race this weekend at Assiniboia Downs. On Saturday night, it’s the $27,500 Manitoba Mile for three-year-olds-and-up. The best horses on the grounds are entered and the favorite has to be Murray Duncan’s red-hot Plentiful with Tyrone Nelson aboard. Plentiful, which won four stakes races including the Manitoba Derby last year and has won the Free Press Stakes and the R.J. Speers Stakes in its last two outings this year, is probably the best horse on the grounds.

However, Plentiful will get plenty from Jerry Gourneau’s Witt’sdollarnight with Kayla Pizzaro in the irons, Don Schnell’s Langara with Antonio Whitehall in the saddle and Steven Gaskin’s Media Melee with Stanley Chadee Jr. up. This should be a tremendous race and it will go to post at about 9:27 p.m.

On the trainer’s side, Jerry Gourneau didn’t have a winner on Wednesday but is still more than doubling the No. 2 contender in the trainer’s standings. Gourneau now has 27 wins, 23 seconds and 18 third-place finishes in 148 starts (he had three of four horses in the money), and has amassed $229,813 in earnings. Defending champion Tom Gardipy Jr. is next with 13 wins and $133,638 in earnings in 136 starts, while Don Schnell is still tied for second, despite only 42 starts. Schnell has 13 wins, nine seconds and a third and has finished in the money in 58 per cent of his races. He’s won $121,637.

There is racing on both Friday and Saturday nights this weekend and, of course, on Fridays, Saturdays and Sundays, the free VLT tournaments continue, starting at 8 p.m. each night. You can get into the draw for 10 chances to win $20 in free VLT spins. The top winner from each night participates in a month-end finale for more spins and $250 in prize money.

And don’t forget, we’re only two weeks away from Manitoba Derby Weekend. The Oaks goes to post on Friday, Aug. 3 while the Derby thrills racing fans on Monday, Aug. 6.