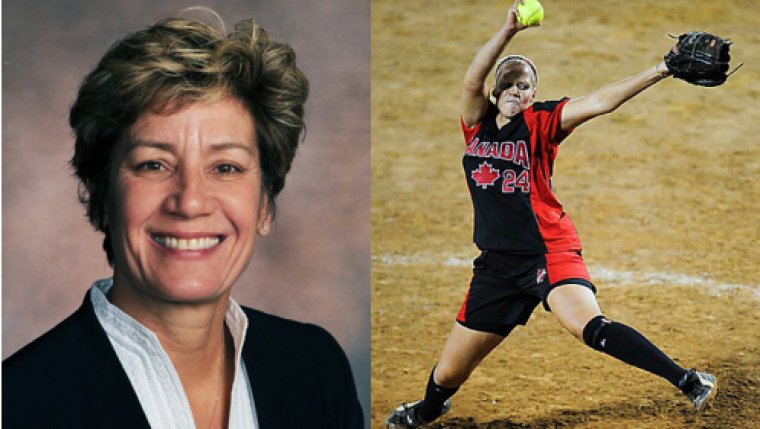 WINNIPEG, MB - Two of the finest female softball players in Manitoba history will lead the 2018 Class of Inductees into the Manitoba Softball Hall of Fame.

Jill Mathez, a tremendous all-around athlete and former National Team pitcher Ashley Lanz, will join six other outstanding individuals and two teams on the night of May 5, when the inductions are celebrated.

This year’s list of inductees includes athletes Ed Gilroy, Gregg Waldvogel, Jim Pomeroy, Edgar Stevenson, Lanz and Mathez. Pomeroy and Stevenson are being inducted posthumously. Those in the All-Around category include Dave Boch and Reice Pelletier while the teams are the 1997-2001 Gladstone Whips and the 1976-1978 Mariapolis Blues.

The Manitoba Softball Hall of Fame & Museum, Inc. recognizes individuals, teams and organizations for outstanding achievement in softball and/or for contributions to the sport of softball. Let’s meet this year’s inductees.

David Boch – All Around

Dave Boch, 73, hails from Selkirk and has had a long and illustrious career in Manitoba Softball as both a player and a coach. As a player in the fastpitch category, Dave has competed at two Senior A National Championships and seven Western Canadian Championships and as a coach competed at three national championships at various levels. As a player Dave was a slick second baseman with a high on-base percentage and batting average. He was awarded the Top Hitter at the 1976 Manitoba Senior B Provincials batting .529.

Ed Gilroy was an outstanding athlete who grew up in in Portage la Prairie.

He began his fastpitch career in 1961 playing with the Portage Dodgers of the Central Manitoba Fastball league. In 1968, he competed at his first of three Senior A National Championships as a player and in 1969 Gilroy was a member of the Manitoba contingent that competed at the First Canada Summer Games, finishing a respectable fourth. In 1973 he joined the Winnipeg Colonels of the Western Major Fastball League. In Slo-Pitch, he competed in several World Championships with a variety of teams and was part of the team that won the Gold Medal at the 2005 Western Canadian Tournament in Winnipeg.

Jill Mathez was born in Winnipeg in 1963 and by her eighth birthday was playing softball and beginning a career that would take her across the nation competing in the game that she loved. Mathez excelled at many different levels of softball from Minor to Junior to Senior and to Masters. She played Co-ed Slo-Pitch winning several Provincial Championships and played fastball at two Indigenous Games winning the Gold Medal at the North American Indigenous Games in 2002 and the Gold Medal at the Canadian National Aboriginal Fastball Games in 2009. She was a stellar centerfielder and boasted a lifetime .444 batting average with the Smitty's Senior Women's Team. In 1997 she was recognized as All- Star Centerfielder at the Senior Women's National Championships that were held in St. Antoine, NB, where she helped her team win gold. She was part of a strong Smitty's Senior Women's Fastball Team and helped her team win five Gold Medals from 1995 to 2000.

Reice Pelletier began his career as a coach in 1981, coaching his daughter at Southdale Community Club in Winnipeg. By 1987 his passion for softball became evident as he went on to serve as Dakota Community Club convenor. During his eight-year tenure, Reice helped the softball program grow from six to 50 teams. In 1995 Reice became part of the women's Lightning Softball Association and over a period of 11 years with this organization his teams qualified for eight National Championships, earning a Silver medal in 2003 and two Bronze Medals in 2000 and 2004.

Jim (Farmer) Pomeroy, 67, was born and resided on the family farm in Alexander, Man. He began his softball career as a young boy playing at Alexander School and went on to play for his high school, Vincent Massey Brandon in 1967. Jim was asked to join the Senior A Merchants in 1976 and played first base with this team for many years. Jim was one of the core group of players that won several league championships and represented Manitoba at the Western Canadian B Championships on two separate occasions. Jim was honoured to be selected as All-Star First Baseman in 1979 at the Western B Championships held in Lethbridge, Alberta. Jim passed away in 2005.

Ashley Lanz, 33, was one of the finest softball pitchers ever produced in Manitoba. She started her softball journey at six and by the time she was 21 would be a member of Canada's Senior Women's National team. She competed at many Senior A National Championships representing Manitoba as part of the strong Smitty's Women's Softball Team while being awarded Top Pitcher at the 2008 and 2009 championships. She was part of Canada's National team from 2005-2012. Internationally Ashley played for the Netherlands and Czech Republic as well as playing in the Italian Professional League. She was the star pitcher for Minot State and in 2005 was selected All-American Pitcher of the Year. She pitched for Canada at the Pan Am games in Guadalajara, Mexico and was awarded Top Pitcher Honours at the Pan Am qualifiers which were held in Guatemala in 2005.

In 2007 Ashley pitched with Canada and won the Gold Medal at the Olympic qualifiers in Thailand. She continues to share her passion for the game as a pitching instructor and team coach.

Edgar Stevenson was born in Rivers, Manitoba and then moved to Peguis, where he learned to pitch, following his father who was well-known in that softball community. In 1989, Edgar earned the Top Pitcher Award at the Western Canadian Bantam Championships where his team won gold. He was awarded the Top Male Player and Top Male Minor Player awards by Manitoba Softball. That year he also played as part of the bronze-medal winning Manitoba Summer Games team. In 1990 Edgar was recognized at the National Midget Championships as both All-Star Pitcher and Top Hitter in the tournament, posting a .542 batting average. In 1991, he won the Top Player award in the playoffs at the National Midget Championships while helping his team, the Landmark Knights, finish second. Stevenson was lost to the softball world in a tragic car accident in October of 1991. He was only 17.

Gregg Waldvogel, 56, was an all-around athlete who played hockey with the Selkirk Steelers from 1979-82 and as a position player and outstanding hitter for the ball teams with which he played. Gregg began his softball career like many other players of his time by playing for his high school in Killarney. He competed at two Senior A Men's National Championships as well as several World Tournaments held in the United States. As a team member, Gregg was Provincial Champion 15 times over his career and individually he was selected as Manitoba's Senior Men's Player of the Year in 2003 and was recognized as the Top Pitcher at the Western Canadian Masters Championships in 2013.

Teams of skilled players can achieve success in sport but when the team is built from a community of less than 100 people it is extraordinary. Primarily comprised of local farmers, the Blues dominated the South Central Fastball League, so in 1976, decided to join the higher-level South West Major Fastball League. In 1977, the Blues won the league title, but their greatest highlight came in 1976. That year, the Blues won Gold at the Manitoba Games in Neepawa. The team was welcomed back home with an impromptu parade led by a long-time fan from the community, who led the parade of vehicles into town with his tractor.