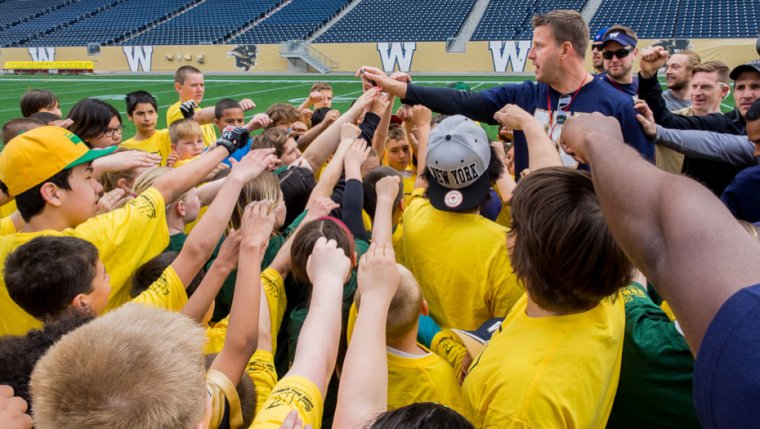 WINNIPEG, MB - KidSport Winnipeg announced that David and Ruth Asper are once again supporting the Doug Brown Football Camp with a $15,000 donation.

This will be the 9th annual camp and takes place Sunday, May 12. The camp is open to athletes in Manitoba who received funding in 2017 from KidSport in order to play football.

“It’s a pleasure to support KidSport Winnipeg and Doug’s camp again this year,” said David Asper. “We believe all kids should be given the opportunity to participate and are delighted we can help get kids active and healthy.”

Brown, along with a number of current and retired CFL players will be taking kids through all the elements of a football combine, as well as position-specific fundamental drills, and exercises.

"It’s always a question of who the camp is most rewarding for: the kids, the players, or all the volunteers.” said Brown. “It’s just a fantastic experience and opportunity for the kids to get exposure to current and former players and everybody always leaves with a smile on their face—unlike the challenge. I’d like to thank the Aspers for yet another year of being the title sponsor and helping the kids in our community. They are long-time supporters of football in Winnipeg and understand the importance of what KidSport provides to those facing financial barriers to sport. They are, and have been, a tremendous addition to our team!”

Since 2010 over 700 kids from across Manitoba have attended the camp. The camp is free to all participants and is also supported by The Axworthy Health & RecPlex, KB2 Clothing, Boston Pizza, Save-On-Foods, and the Winnipeg Blue Bombers.

“The ninth annual Doug Brown Football Camp is a great example of business, non-profit, media, sport celebrities, and volunteers all working together for the greater good of kids in Winnipeg”, said Rick McGregor, Co-Chair, KidSport Winnipeg. “The generosity of the Aspers along with the significant investment of time from Doug, and former and current Winnipeg Blue Bombers are all important components that have contributed to the on-going success of this camp for Winnipeg kids. KidSport volunteers from the community provide the important final piece to allow us to provide an atmosphere where the kids at the camp can learn football skills, techniques, and most importantly, the value of hard work and team work from former pros in a safe and encouraging environment.”

The camp will take place at the Axworthy Health & RecPlex at the University of Winnipeg.

With files from KidSPort Winnipeg