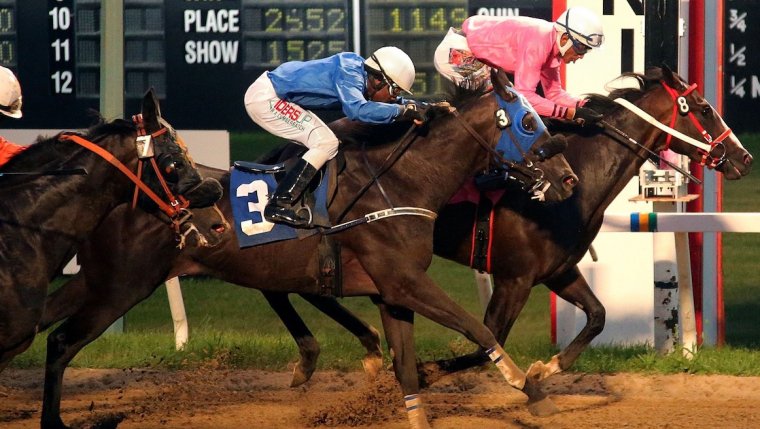 Prayven Badrie has come a long way since 2011, when he first arrived at Assiniboia Downs from his home in Trinidad.

In fact, this weekend Badrie won two races and moved into third place in the jockey standings at ASD, just six wins behind leader Antonio Whitehall.

For Badrie and his team, success at the Downs is not surprising. After all, the 28-year-old veteran rider has been training for this since he was 18-years-old.

“I started as a jockey in 2009 as an 18-year-old in Trinidad,” Badrie explained. “My father was a groom at Santa Rosa Park in Trinidad and I went to my dad and I was going to help him with the horses, but when I saw the jockeys riding, I said, ‘I think I can do that, just give me a chance.’ And things worked out pretty well.”

Indeed. Just two years later he was riding in Winnipeg.

“There was a groom who worked at Assiniboia Downs named Square Boy, who was from Barbados and he came to Trinidad and he liked the way I rode,” Badrie explained. “He said to me, ‘Why don’t you go to Canada?’ and I said, ‘I have no one that I know in Canada to help me get there.’ And he said, ‘I’ll put you on to the CEO of the track where I was in Canada.’ And that was Mr. (Darren) Dunn and he offered me an opportunity. Square Boy talked me into coming to Canada after I won seven races in Barbados.”

Badrie’s first year at ASD was 2011 and when he arrived, he was still four wins shy of losing his bug designation. But he put together 11 wins as a 20-year-old in Winnipeg and came back for the 2012 meet.

“I came back in 2012 and I had 17 wins, but I lost my confidence,” he said. “I thought I should have been better and so I went back home to my family.

“I had a break from Assiniboia Downs from 2012 to 2017 and just raced at home. In 2015, I won the jockey championship back home. It was really good then but almost overnight, our purses just dropped. I mean, they just dropped right off, it’s a really long story why, but they dropped right off and I decided I need to go somewhere where I could make some money so I decided to come back here last year and I won 29 races and two stakes races.”

Badrie, who already has 25 wins with 13 days left in the 2018 meet, is pleased with his decision to return to Winnipeg.

“It’s good here,” he said. “My agent George Williams really pushes me and he works hard for me and he’s done a very good job. My father and the rest of my family really support me.”

He usually goes back home after the ASD season, but this season he says he intends to race at another North American track, likely Hastings Park in Vancouver.

“I like it very much here,” he said. “The people are very friendly and George is my friend and a good agent. I’m quite happy here.”

This week, racing returns on Wednesday night and there will be racing on both Friday and Saturday this week. Here’s a look at the week’s highlights: