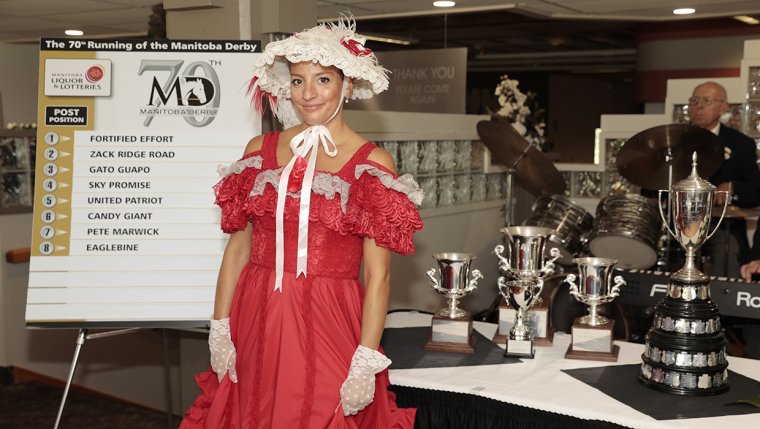 Still, Morales thinks his gelding, Pete Marwick, has a chance.

“He’s good, I think he can handle the race,” said Morales, referring to the mile and an eighth distance on Monday.

“It’s an open race and we’ll just hope for the best. I don’t think the invaders are superstars. I really like my horse. I think he has a shot. The last time we ran against Candy Giant (in the Harry Jeffrey Stakes on July 14), I had a good chance to win the race, but coming down the stretch his tongue tie broke and it was flapping on his face. Then he saw the stage for that (EDM) concert and it spooked him. He was coming down the stretch and he started looking at the stage. I don’t know whether it was the tongue tie or the stage, but he was running a good race and then he got distracted. Hopefully that won’t happen on Monday. It didn’t happen in his last race.”

After finishing second to local favorite Candy Giant in the Jeffrey, Pete Marwick, was sent out again on July 25, to run an $11,700 allowance race. It’s rare that any local horse in the Derby will run in between the Jeffrey and the big race, but for veteran successful trainer Gary Danelson, it obviously wasn’t a problem. Pete Marwick, a Florida-bred who ran at Gulfstream Park as a two-year-old, won the allowance by a length and a quarter and seems to be in fine form heading into Monday’s $75,000 Derby.

Pete Marwick is your best bet to turn a big profit on Monday if the gelding keeps the tongue tie in his mouth and doesn’t get spooked by the stage for the Unreal Music Festival which will be held this coming Sunday night at the Downs.

On Friday, the post positions were drawn for the biggest race of the meet and Pete Marwick drew one of the outside positions, although, over a mile and an eighth, Morales didn’t think it would be an issues.

Let’s look at the eight entries for Monday’s race:

The Derby is wide open. It’s hard to pass on Gato Guapo who is coming off a win in a $40,000 claimer at Monmouth Park. As well, the Downs’ leading jockey, Antonio Whitehall gets the ride.

It’s also tough to ignore the favorite, Candy Giant, who has won his last two of his last four races, including a victory over Pete Marwick in the $27,500 Harry Jeffrey Stakes on July 14.

Here at Manitoba Post, we like a Triactor of 3 (Gato Guapo), 7 (Pete Marwick) and 6 (Candy Giant), but with four solid invaders in the race, this one could belong to any of the eight entries.

And don’t forget, on Friday night it’s the $30,000 Manitoba Oaks for the best three-year-old fillies on the grounds. The favorite at 3-5 is No. 1, the Texas invader True Confession, ridden by Adolfo Morales and trained by C.E. Smith. The local star, Estherfourfourteen, at 7-2, is ridden by Kayla Pizarro and trained by Steven Gaskin. It’s a small five-filly field over one mile. The Oaks should go post around 8:05 p.m. on Friday night.