Is a Vote on Portage & Main Necessary 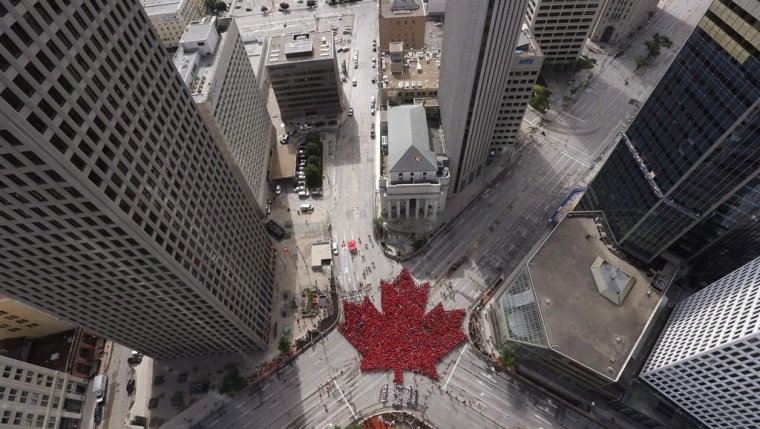 WINNIPEG — For decades, Winnipeg residents have debated the idea of allowing pedestrians to once again cross a downtown intersection many consider iconic.

This fall, they may be able to vote on it.

Mayor Brian Bowman announced Wednesday he supports a fellow councillor’s motion to include a referendum question in the upcoming municipal election on whether to remove the concrete barriers that prevent people from crossing the road at Portage Ave. and Main St.

"I’ve been listening, and certainly respect that Winnipeggers have passionate and polarizing views on the intersection’s future," he wrote on Twitter. "Winnipeggers will expect the results to be honoured which I’m committed to do regardless of the outcome."

Arguments over a roadway juncture may be minor in other cities, but in Winnipeg, there has been passionate — sometimes heated — debate between those who say the barriers help traffic flow and those who say removing them is crucial to help turn Winnipeg’s downtown into a more−modern, people−friendly metropolis.

"Forty years ago, we decided to erect concrete walls and remove people from a place that has held a special narrative in our city, and to be honest, in the country," said Brent Bellamy, an architect who chairs an arm’s−length city development agency with a focus on the downtown.

"Two generations have only known Portage and Main in the configuration of what is essentially a freeway interchange. It has lost its special place."

There is no public square in the intersection. There’s not much to see except office towers on the corners, traffic lights, several lanes of traffic, and an old Bank of Montreal building from the city’s early days.

But Portage and Main is held dear to many people’s hearts. It was where the city’s first business was set up outside a fort to the south. It was the centre of Winnipeg as the city grew, a century ago, to become the gateway to the West.

The intersection has appeared on a stamp, been the subject of a song by rocker Randy Bachman, and is where people gather, blocking traffic, when the NHL Winnipeg Jets give fans cause to celebrate.

The 40−year agreement to keep Portage and Main’s barriers up is set to expire soon, and Bellamy and other proponents have listed several reasons why millions of dollars should be spent to open up the intersection: Increased foot traffic would be good for street−level businesses, make it easier for people with disabilities to get around, and make the downtown more walkable.

"If you think about the best cities you’ve ever been in, you don’t come home from your vacation and say ’Wow, I could drive out of that city centre really quickly’," Bellamy said.

"It’s about the experiences you have walking the sidewalks and the social engagement you have with other people."

But supporters of the status quo are just as adamant. They say the barriers keep pedestrians safe and minimize traffic jams. They also say the millions of dollars required to open up the intersection won’t make much of a difference to the downtown, because pedestrians can already cross either street one block in any direction.

Jino Distasio, the director of the Institute of Urban Studies at the University of Winnipeg, counts himself among those with conflicted feelings.

"We need to get more Winnipeggers ... and tourists coming downtown, period. I don’t really know that one intersection is life−and−death for the City of Winnipeg in terms of whether we open or close it."

Other residents are tired of the issue. Bowman campaigned in 2014 on a promise to open the intersection and has now decided to let the public vote on it. One of his opponents this time around, Jenny Motkaluk, has promised to keep the intersection off−limits to pedestrians and has made the issue one of the main planks in her platform to date.

"I swear if #wpg18 becomes all about (Portage and Main), I’m going to cry," Twitter user Matt McLean posted, using the hashtag for the municipal election.