Has Escape Clause Become Too Good? 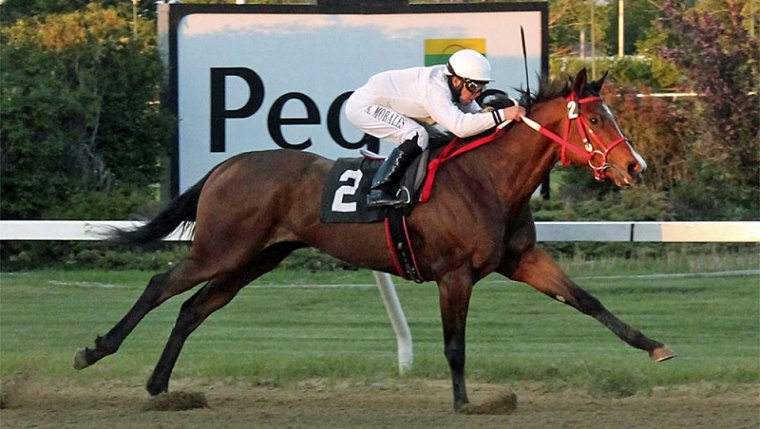 Last weekend, Assiniboia Downs enjoyed one of its most successful Canada Day celebrations ever.

On Sunday, the parking lot was filled and the third-floor grandstand was almost standing room only as the largest Canada Day crowd in decades celebrated Canada’s 151st birthday. According to the veterans, it looked more like Derby Day than a holiday Sunday in July.

However, without trying to dim the mood, there was one concern. For the first time since it became a race for fillies and mares back in 1983, the $27,500 Canada Day Stakes wasn’t run on Sunday because of insufficient entries. Four horses are required for a Stakes race, but only three entered.

It wasn’t because there aren’t enough quality fillies at the Downs. On the contrary, based on the weekend’s large fields and quality races, there are plenty of fillies and mares on the grounds.

Trouble is, none of them want to face the four-year-old super horse, Escape Clause.

According to Ivan Bigg at the Downs, “Rather than race against her, the connections of Stevie Mac, who originally had nominated their mare to race in the Canada Day, instead planned to race her at Canterbury Park in Minnesota. So only Tadaa and C J’s Fling, last year’s Canada Day Stakes winner, were willing to go hoof-to-hoof with last year’s Horse of the Year.

“What seems odd, though,’ Bigg added, “is that there’s nice purse money for finishing in runners-up positions. One would think that would have been considered by potential entrants.”

Downs CEO Darren Dunn would hate to lose Escape Clause to a bigger American track but understands that could, indeed, be a possibility.

“It is clear that the talent that Escape Clause brings to the table is intimidating the local competition,” said Dunn. “How many times we will be able to see her race at Assiniboia Downs is now up in the air after the recent Canada Day Stakes did not fill. The bottom line is that this kind of horse needs a suitcase – as in she may need travel plans to find regular racing opportunities.”

It would be sad to lose her, but in Winnipeg, there simply appears to be no willing competition for her.

However, the race is getting closer and the top of the table is getting crowded. Kayla Pizarro, is now fourth with 13 wins, Chavion Chow, is next with 12 wins; Renaldo Cumberbatch is fifth with 11 winners and defending jockey champion, Rohan Singh, who is starting to heat up, now has nine.

Remember, live racing this week is on both Friday and Saturday, with 7:15 post parades on both nights.