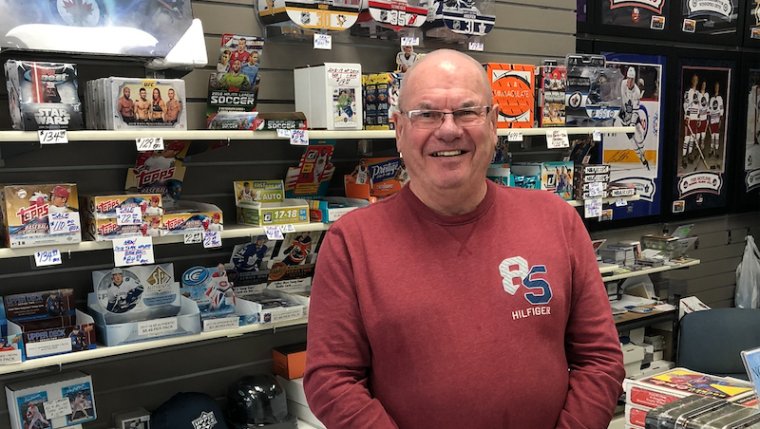 Imagine going into Tim Horton’s and getting a chance to order a double-double and talk to Tim Horton.

Or imagine going to Wayne Gretzky’s restaurant and getting to sit and have dinner with the Great One.

Or imagine going into Joe Daley’s Sports and Framing and getting an opportunity to visit with one of the best goaltender’s to ever come out of the city. Oh wait, you can actually do that.

Joe Daley, a homegrown talent who made his way from playing minor hockey in East Kildonan, to the bright lights of the NHL, before suiting up for his hometown Winnipeg Jets, is coming up on another milestone, this time celebrating 30 years as a business owner in Winnipeg.

Daley, who began the business with his son Travis almost three decades ago, enjoys spending time at the shop, and says even after 30 years, it still surprises people who walk in and will see him standing behind the counter.

“We get a lot of fans who still come through the door, and especially when they’re from out of province, I don’t know whether they hope I’m here or not, but I can see excitement on their face when they walk in and see me standing behind the counter.”

Daley’s passion for hockey has continued in his business, but his foray into goaltending began when he was growing up in East Kildonan, when he found out there was a sign up at the Bronx Community Centre to play Tom Thumb hockey.

“I went down on my own and signed up to be a goalie because nobody had signed up for that position, and so I knew I was going to be able to play.”

As the years went on, the passion for the position began to grow, and Daley began to realize this might be something he could pursue as a career.

“As with many kids, I could hardly wait for Hockey Night in Canada on Saturday nights because that was the only time hockey was on, and I began to realize the passion I had for the game of hockey, and that I wanted to pursue it.”

That decision turned out to be a good one, as Daley excelled in the position. After playing Juvenile hockey in Winnipeg, Daley moved away from home for the first time at the age of 18 to join the Weyburn Red Wings, who were sponsored by the Detroit Red Wings. It was a move that Daley says helped him a lot.

“It was tough to move away from friends and family, but it made it a lot easier to focus on hockey and not having to impress anyone except for the coaches and fans in Weyburn, and I always look back at that as a really influential part of my life, and I really cherished my two years in Weyburn.”

It was during this time that Daley realized a career in professional hockey was something he could pursue.

“I think at times I feel like I was working with blinders on because the competition for goaltenders in a six-team league in the National Hockey League, I don’t want to say was impossible, but definitely very difficult because you had to be one of the best six in the world at the position,” says Daley. “But just the thought of maybe being able to start a game in one of those famous buildings I watched on TV, was what kept me going, and it eventually paid off. ”

After spending time in the Detroit Red Wings organization, Daley was drafted in the expansion draft by the Pittsburgh Penguins, and it was there that Daley got his first taste of NHL hockey. “You know, I don’t really remember much about that first game, I think it was just an overwhelming feeling of knowing I accomplished my dream is what I remember most about that game.”

After his time in Pittsburgh, Daley moved on to Buffalo, then was traded to Detroit, his last stop during his five-year NHL career.

While in Detroit, the relationship between Daley and the organization began to unravel, and it got to the point where Daley told them he would never play with them again. During this time, there were rumors circulating about a new league forming to compete with the NHL called the World Hockey Association,

“I got a call from Billy Robinson, the original director of player personnel for the Winnipeg Jets, who asked me if I would consider coming home to play, and I thought to myself “this is too good to be true” and after a quick talk about a contract over the phone, I was headed home.”

The timing couldn’t have been more perfect for the WHA, and the Jets made one of the biggest splashes in hockey history, luring Bobby Hull, one of the greatest players in the world at the time, away from the Chicago Blackhawks, signing the future Hall of Famer on June 27, 1972, at the corner of Portage and Main, to the richest-ever contract given a North American professional athlete — $2.75 million over 10 years, with a front-loaded $1-million bonus.

“I knew once we signed Bobby, I said that was my insurance policy because I felt that the league had a chance to survive, at least for a period of time, which it did, and I never regretted leaving the NHL.

Daley was one of the most recognizable faces in Winnipeg, not only because of his play, but because he was one of the last goaltenders to wear a mask in professional hockey. When he came to Winnipeg, his good friend Wakely convinced him to try one.

“Ernie told me that I had to start wearing a mask because when it was his night off, he wanted to make sure he had the entire night off and not have to me if I got injured,” says Daley with a laugh.

Daley would go on to win three AVCO Cup championships during the club’s entire seven-year existence in the WHA, retiring after the 1978-79 season as the winningest goalie in WHA history. It’s a time that Daley looks back at very fondly.

“It was just the right time for me,” Daley says about his decision to retire. “A lot of players want to hold on, but I could feel like it was the right time and I think the greatest years of my life were spent here in Winnipeg, with some of the greatest players I’ve ever played with, so I have no regrets.”

After his career, Daley spent time in the real estate industry, as well as coaching junior hockey in Penticton B.C for four years. Joe’s son Travis eventually convinced his dad to open up a sports card store in Winnipeg. Travis ran the operation initially, but Joe joined eventually joined him. The business is now going on 30 years, from its humble beginnings on St. James street, to its current location at 513 St Mary's Rd, and Daley has enjoyed every minute of it.

“I’m still having an enjoyable life doing what I love to do, and that’s meeting people, talking to people, and be of service to people,” says Daley. “We enjoy the fact that no matter if people are spending a dime or a dollar, everyone can feel comfortable, everyone is a friend, and everyone is always welcome.”