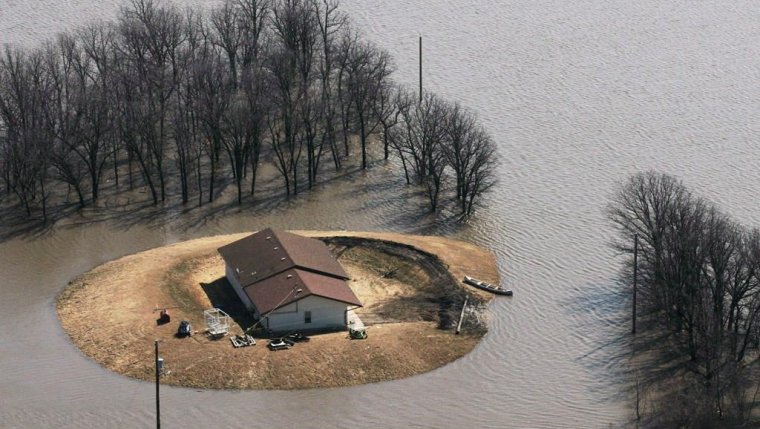 WINNIPEG — Heavy snowfall in the United States has raised the threat of flooding in Manitoba’s Red River Valley this spring.

The province says, with average weather over the next few weeks, that the Red River Valley could see flooding higher than in 2009, when several communities had to close some or all of their road access to the outside world.

The main highway linking Winnipeg to the U.S. could be underwater for weeks, causing long detours for motorists, and a lot of farmland in the region is expected to be swamped.

Homes and other buildings in the region have been raised since the so−called flood of the century in 1997, which brought water levels much higher than what is now forecast.

Winnipeg itself is protected by a massive channel called the Red River Floodway, which diverts water around and away from the city.

In Morris, a town of 1,900 that lies 50 kilometres south of Winnipeg, residents are preparing for a repeat of 2009, when three of the four roads leading out of town were closed off with a ring dike to keep water at bay.

"Certainly, a 2009−magnitude flood is very difficult for the entire area — especially those who are farming and those who need access to the community of Morris ... as there is only one way in and one way out," Morris Mayor Scott Crick said Monday.

"Short of the 1979 or 1997−type, once in a century flood, really the town will remain safe. We’re protected by the ring dikes."

Other areas of the province are not expected to face much trouble this year.

The 2009 flood also created havoc north of Winnipeg, when ice jams caused parts of the Red River to surge suddenly and flood rural homes. Many residents on Crown land in the lowest−lying areas were later forced to relocate.

Manitoba sees some sort of flooding almost every year, as meltwater rushes in from as far away as the Rockies and South Dakota. The extent of any flooding depends on a number of factors including soil moisture, the speed of the spring thaw, and any heavy snow or rainfall that coincides with the melt.

Crick said he is hopeful low soil moisture — the result of two dry years in the region — will help.

"The ground has an incredible capacity to absorb moisture and the hope is that if the thaw happens gradually, it’ll give the ground a chance to absorb a lot of water and hopefully the actual (flood) event will come in below forecast."