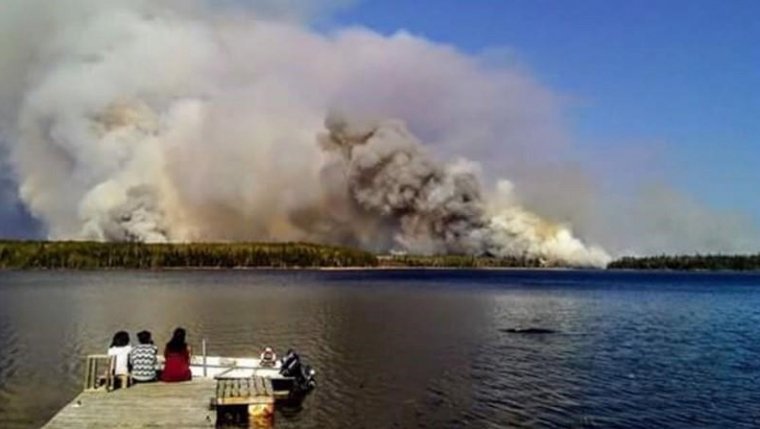 WINNIPEG — Hundreds of people from a Manitoba First Nation are sitting in the local school as a raging forest fire encroaches on the community.

Evacuations from Little Grand Rapids — a fly−in community about 260 kilometres northeast of Winnipeg — began on Tuesday but heavy smoke made it impossible for planes to land.

Only about 60 people were brought out, and the rest went to the school to stay safe overnight. There are reports eleven homes have burned down.

The 200−square−kilometre fire reached the airport overnight and has moved close to a neighbouring community, which is also being evacuated.

Amik Aviation, which provides transportation to northern communities, cancelled all of it’s regularly scheduled flights to help with evacuations.

Manager Terrence Owen, who has family in Little Grand Rapids, is getting texts, phone calls and pictures which describe the blaze creeping closer and the smoke getting heavy.

"It’s pretty bad," he said Wednesday. "No one has seen a fire like this before."

Amik’s pilots could only use float planes to land on the water because the fire was still too close to the airport.

People then take a boat to the plane, but Owen says they can only evacuate a handful of people at a time.

Crews from Manitoba and Ontario are fighting the fires along with water bombers from Quebec.