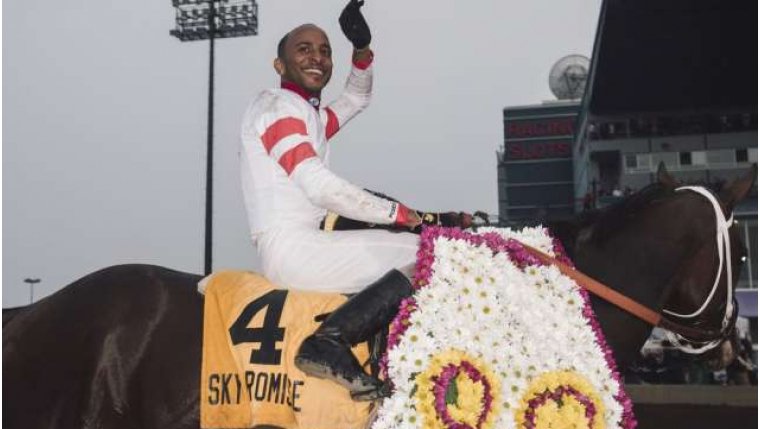 While the sold out buffet at the Terrace Dining Room continued to draw a packed house at Assiniboia Downs, the big races just happened to be on TV in the clubhouse this weekend.

Chef Gerry Tummillo’s popular race-night dinners are now sold out for the rest of the season, but there is still nothing better than grabbing a meal off the menu and watching and wagering on the best summer races all over North America. This weekend, there were two big ones with Manitoba connections.

Saturday was the final day of racing at Northlands Park in Edmonton. Next year, Edmonton will have a brand new track, Century Mile, a few miles south of the city down the highway near the airport. However, on the final day in the history of Western Canada’s most revered bull-ring style track, Sky Promise and Escape Clause made all the noise.

First it was Escape Clause, the Manitoba-bred filly who has beaten just about everybody at Assiniboia Downs, the $75,000 City of Edmonton Distaff Stakes. The magnificent four-year-old multi-stakes champion took command quickly, saved ground while setting the pace from just off the rail, but was overtaken briefly by Tara’s Way through the backstretch. That’s when jockey Keishan Balgobin asked for her best and she responded. Escape Clause went to the lead and was kept to task under steady handling, producing a solid kick near the wire to win by 4 ½ lengths.

The Don Schnell-trained Escape Clause has now won five consecutive races and 11 stakes races in the past two years. There is talk that she will defend her 2017 Manitoba Matron championship on Friday, Sept. 7.

Then, in Race 12, the final race ever run at Northlands, it was Manitoba Derby champion Sky Promise’s chance to shine in the $200,000 Canadian Derby. And this was a no doubter. Sky Promise, ridden by Rico Walcott, the same jock who rode him in Winnipeg on Aug. 6, beat Day Raider by a length, but it could have been 10. If the race had been longer than a mile and three eighths, Sky Promise might have lapped the field. It was a tremendous performance and a fitting way to close out Northlands’ glorious 118-year history.

Meanwhile, at Saratoga Race Track in Saratoga Springs, N.Y., Canadian filly Wonder Gadot met her match. In fact, she ran into some very bad boys who left her way behind at the finish.

In the $1.25 million Runhappy Travers Stakes, one of our pre-race picks, Catholic Boy, with Javier Castellano aboard, went off at 8-1 and shocked the field, winning with ease over Mendelssohn and Bravazo. Canada’s Queen’s Plate- and Prince of Wales Stakes-winning filly, Wonder Gadot was dead last. She ran with the big boys until the head of the stretch, but by that point her tank was empty. This field was so good, the favourite, Good Magic, was barely ahead of Wonder Gadot at the finish.

This coming Saturday, Sept. 1, the best horses on the continent – including Gunnevera, Tapwrit and Patch -- will come together at Saratoga for the 64th running of the Woodward Stakes. The Woodward’s champions include Kelso, Seattle Slew, Affirmed, Cigar, Curlin, Rachel Alexandra and Spectacular Bid.

You can wager on the Woodward at Assiniboia Downs.

Meanwhile, with only seven days of racing remaining in this year’s 50-date meet at Assiniboia Downs, Antonio Whitehall still leads the jockey standings but Prayven Badrie is making a race of it. Whitehall is on top with 36 wins, 43 seconds and 37 thirds in 217 starts with an impressive $413,258 in winnings for his owners. Badrie is next with 30 wins, 30 seconds and 33 thirds in 193 starts and has won $309,054. Badrie won three times this past weekend.

On the trainer’s side, Jerry Gourneau still has regained the solid lead he’s held for most of the meet. Gourneau, who won twice this weekend, has 31 wins, 38 seconds and 33 third-place finishes in 227 starts, and has amassed $306,866 in earnings. Don Schnell remains second, despite only 73 starts at ASD. Schnell, who won big money with Escape Clause in Edmonton this weekend, has 23 wins, 11 seconds and nine thirds and has won $258,684. Defending champion Tom Gardipy Jr., who won twice this weekend, is third. Gardipy Jr. has 20 wins and $204,864 in winnings in 195 starts.

There is racing at the Downs this coming Wednesday, Saturday and Holiday Monday. There is no Friday night racing this week. Post time on Wednesday and Saturday is 7:30 p.m. Post time on Monday is 1:30 p.m.

Don’t forget, even without racing, the free VLT tournaments continue on Friday, Saturday and Sunday, starting at 8 p.m. each night. You can get into the draw for 10 chances to win $20 in free VLT spins. The top winner from each night participates in a month-end finale for more spins and $250 in prize money.