Escape Clause Horse of the Year 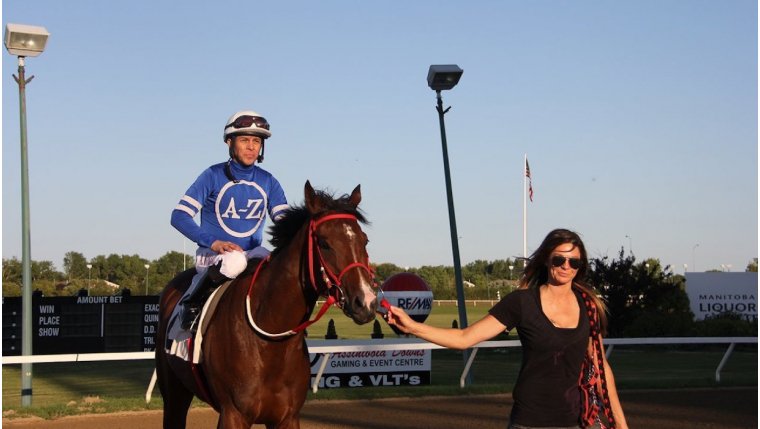 WINNIPEG - It’s unlikely this was unsuspected -- and that means even to casual racing fans who go out to Assiniboia Downs only once or twice a year.

“It doesn’t get any better than this,” said part owner Barry Arnason as he accepted the award on behalf of owner/trainer Don Schnell and the True North owners Phil Allard and Pat Beavis.

Not since Liz’s Pride in 1978 has there been a Manitoba filly who showed Escape Clause’s talent, winning seven of eight races and finishing second to Plentiful in the Manitoba Derby. She then went to Alberta where she tackled and beat horses bred in B.C. and Alberta.

There will be plenty of talk about Escape Clause’s spectacular 2017 season this weekend at the Downs with three days of racing on tap – Friday and Saturday at 7:30 and Monday, Victoria Day, at 1:30 p.m.

As well, on Saturday it’s the second jewel of the Triple Crown, the Preakness Stakes from Pimlico race track in Baltimore. Kentucky Derby-winner Justify is the 1-2 morning line favorite with Good Magic next at 3-1.

The problem, however, could be the weather. Rain is predicted for all this week including Saturday and Justify obviously liked the slop at Churchill when he won the Derby. That sets up for a likely Good Magic-chasing-Justify scenario again.

If it rains, a nice crisp $100 bill will be laid on Justify to set himself up for another Triple Crown run at the Belmont Stakes in New York on June 9.

At the Downs on Saturday, there will be six draws for four-glass Triple Crown collections and a $100 First & Worst contest to predict the first and last place finishers in the Preakness.

So remember, the Preakness is slated to go to post at 5:20 p.m. on Saturday afternoon and then live racing resumes again with the post parade at 7:15.

There is also live racing on Friday, May 18, with the opening post parade at 7:15 and the Downs will also go to post on Victoria Day Monday at 1:30 p.m. It’s going to be an exciting weekend of live racing, plus the Preakness.