Dauphin’s Countryfest: Rainy, Rowdy and Raucous as Ever 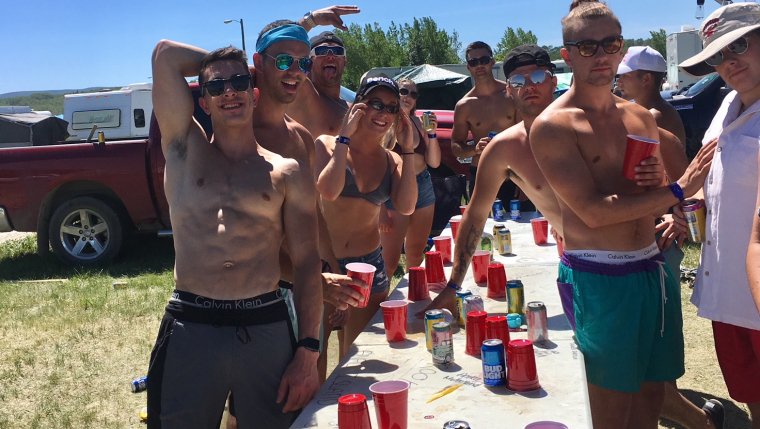 The party just doesn’t stop at Dauphin’s Countryfest. No matter the day, the time or the weather, those looking for a good time need not look any further than Canada’s longest running country music festival.

With the front gates officially opening up for business Wednesday afternoon, country music enthusiasts and summer partiers alike have now been situated in Dauphin, MB. for the past four days, enjoying the music, friendship, activities, food and beverages, all from the comfort of their tents and trailers.

“It’s Countryfest – what can I say?” reflected an excited Clint Torfason from the campground, Friday. “You meet so many people and bump into a bunch of old friends every year. It’s an unreal time. Other than Las Vegas, this is probably the happiest place on earth.”

Although the music at the 29th running of Countryfest has once again been top notch, the weather has been a struggle for most campers. With flooded tents, muddy sites and soaked clothing, the weekend has provided a less than ideal overall climate. The rain may have turned the campsites into miniature ponds, but the party is still going strong in Manitoba’s northwest.

“Cfest is somewhere where you reconnect with all your friends and you’re in the sun every day…. Well, maybe not this year. But there has been a bit of sun, you know?” said Danika Chisholm, a second year participant. “You get to tan, you get to drink, you get to meet new people. You just can’t go wrong!”

Following a beautiful Wednesday and Thursday, the skies opened up on Friday, providing a horrific downpour that pounded through most tents on site, even bestowing rain damage to the strongest of trailers.

The James Barker Band had their early evening concert cancelled, so the group decided to put together a miniature acoustic set on the Club Regent Casino Main Stage front. A general stagehand doubled as a microphone stand for the duration of the performance.

“Personally, I am really looking forward to FGL,” said Torfason – a seasoned Countryfest veteran. “It will be my first time catching them live, so seeing them here in Dauphin is going to be cool. I can’t not mention Dallas Smith either, as I saw him back in 2016, so I’m excited for that show too.”

Countryfest rookie Harley Bray offered a similar scouting report to that of Torfason.

“You know, it’s my first Countryfest, so I’m obviously excited to share some drinks and meet new people, but the main attraction for me is the music,” she said. “The lineup is sick this year. Florida Georgia Line is so good – I actually went to see them last time they were in Winnipeg, and it was amazing. My favourite song right now is ‘Meant to Be’. But yeah, I definitely chose to come this year because of the lineup.”

Florida Georgia Line – six time Vocal Duo of the Year – also entered their Friday night performance under the watchful eye of Thompson, MB. resident Camryn Turton, who made it clear the talented twosome would be the highlight of her weekend.

“I’m really looking forward to FGL,” Turton said excitedly. Eric Church and Luke Combs are obviously also so good too. I like the whole list of headliners, but those are my two favourites. No matter who is playing, it’s a great time to relax and get a good break from our summer jobs.”

Following the James Barker Band’s set early Friday night, Cfest regular Dallas Smith hopped up next and turned it up to 11 with his rock and roll country hits. The former Default frontman paved the way for Florida Georgia Line – who made their return to Countryfest following their debut in 2013.

As was the case with the Dallas Smith show, Florida Georgia Line performed under a steady downpour. The sheets of rain eased up at times, but the show went on. Keeping the crowd swaying and jumping to the music, FGL put together a conglomeration of old and new, with nostalgic originals, ‘Holy’, ‘Dirt’, and ‘Stay’, before cranking up new hits ‘Meant to Be’, ‘Colorado’, and ‘Simple’. The southern duo completed their act with the song that brought about their fame, ‘Cruise’. 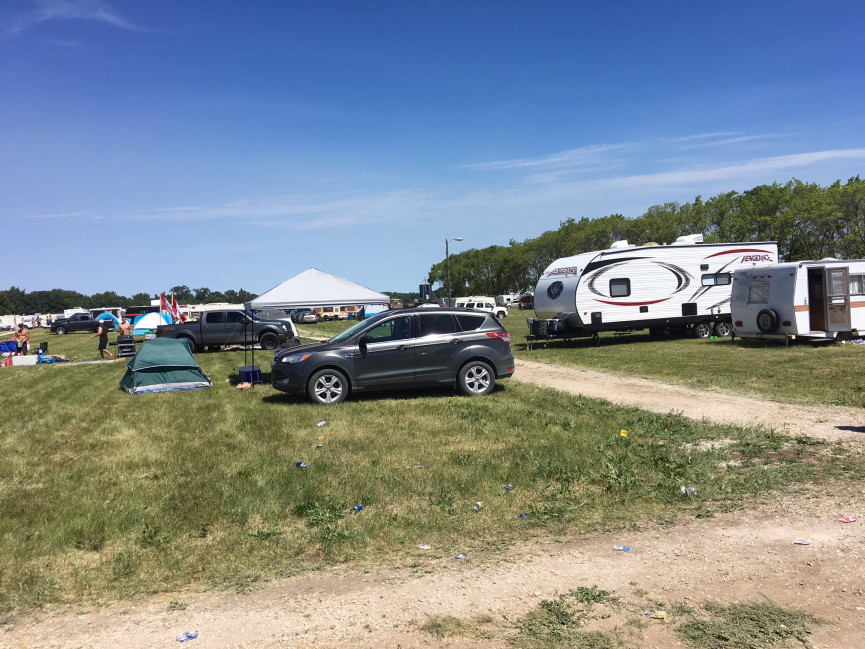 Saturday’s musical lineup began with Midland, before up-and-coming artist Luke Combs made his Countryfest debut. Combs had recently lost his voice and returned just in time for the show in Dauphin. He failed to disappoint with his hits, ‘Beautiful Crazy’, ‘Out There’, ‘Hurricane’ and ‘When It Rains It Pours’.

Eric Church closed out yet another jam-packed show as the 41-year-old pulled out all the hits from his 12-year professional music career – yes, all the hits. Dressed in his classic shades and tight fitting pants, his late-night concert, much to the delight of the Manitoba spectators.

The party continued Sunday as the clouds and storms held off showers for parts of the day. Sunday’s headliner, Canadian artist Paul Brandt put together a solo acoustic show mid day from the campground between periods of rain in preparation for his evening act.

Even as the rains continued throughout the weekend, the party at the southernmost point of Dauphin remained alive and well. Putting the fun into perspective was two lifelong buddies, Anthony Cruz and Tanner Danyluk.

“My favourite part about Countryfest would have to be the people,” Cruz said. “You know that feeling when you wake up in your camper at 7:30 in the morning, and everyone is kind of straggling around – you then just crush a bottle of water and a couple Gatos and it escalates from there. It’s non-stop – girls, guys, new friendships… everything.”

“For me, Cfest is all about drinking beers and making friends,” Danyluk added. “You only get this for five days a year, so you better use each of those days to the fullest.”

No matter who’s performing, where you’re staying, or what you’re drinking, a full glass… err, a full red Solo Cup sure goes a long way in Dauphin, especially on a weekend of weather like this.