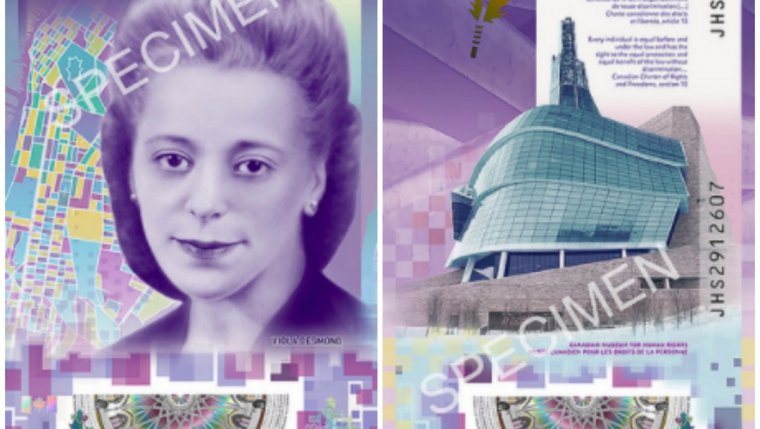 WINNIPEG, MB. - The new $10-bill was unveiled this week at the Canadian Museum for Human Rights featuring Viola Desmond. Viola stood up against racial segregation in 1946 by refusing to leave a white only section of a movie theatre in Nova Scotia.

As well, a prominent image of the Canadian Museum for Human Rights (CMHR) will be featured on the new $10 bank note as a symbol of Canada's ongoing pursuit of rights and freedoms.An external façade of the CMHR, overlaid on an image of its glowing alabaster rampways, will be portrayed on the back, alongside an excerpt from the Charter of Rights and Freedoms and an eagle feather representing the continuing struggle for recognition of the rights of Indigenous Peoples in Canada.

The note was officially unveiled by Stephen Poloz, Governor of the Bank of Canada and the Honourable Bill Morneau, Minister of Finance, at a ceremony in Halifax, Nova Scotia. A reveal event in Winnipeg was held beside the Viola Desmond exhibit, in front of an audience of surprised and delighted elected officials, visitors, donors, members and business and community leaders.

"It's hard to put into words how proud and excited I was to learn that our Museum would be featured on this historic bank note," said Dr. John Young, speaking at the Halifax ceremony. "Viola Desmond's courage has inspired our visitors by demonstrating that one person can make a difference. Hers is a story that all Canadians need to know and one that we are honoured to share."

"This is an incredibly proud day for everyone who contributed to building the Canadian Museum for Human Rights," said Gail Asper, a member of the CMHR's Board of Trustees and National Campaign Chair of the Friends of the CMHRs capital fundraising campaign. "This Museum has become a place of inspiration for visitors from across Canada and around the world."

The Winnipeg reveal event was presided over by Joel Lightbound, Parliamentary Secretary to the Minister of Finance, Terry Duguid, Parliamentary Secretary to the Minister of Status of Women and Filipe Dinis, the Bank of Canada's Chief Operating Officer. Special guests invited to participate in the reveal included Manitoba's Minister responsible for the Status of Women Rochelle Squires, Winnipeg Mayor Brian Bowman and Nadia Thompson, Chairperson of Winnipeg's Black History Month Committee.

With Files from CMHR