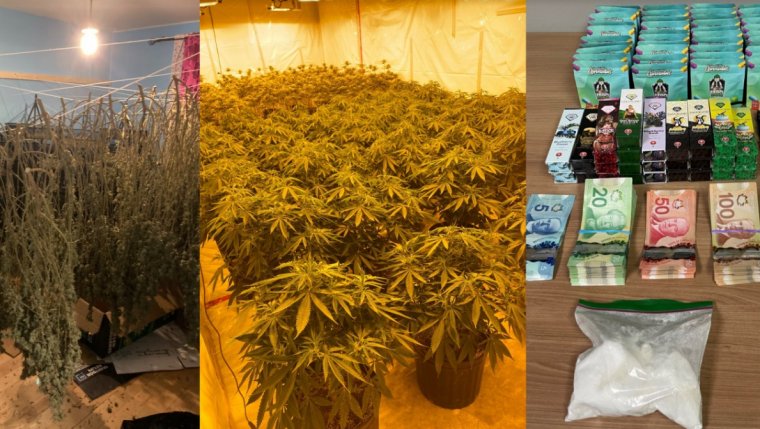 WINNIPEG - RCMP say they've been busy with drug busts across Manitoba, after seizing hundreds of cannabis plants from a rural home, and 335 grams of cocaine during traffic stops, all in the span of three days.

Mounties say the indoor plantation was in the RM of Tache, a 15-minute drive southeast of the Perimeter Hwy. The search also yielded nearly 85 kg of dried cannabis when the regional General Investigative Section and the Crime Reduction Enforcement Support Team executed the warrant under the Cannabis Act this past week.

Police note the search uncovered around 500 plants in multiple stages of growth and processing. Two men in their 30s from Winnipeg were arrested at the scene and later released on a promise to appear in court. They face charges of possessing illicit cannabis for the purpose of selling, and cultivating more cannabis plants than the maximum of four permitted.

The following evening, Dauphin RCMP made a traffic stop along Highway 5, which connects the city to Grandview. The driver refused to conduct a breathalyzer test and was arrested, which is when officers found wads of cash, an open bottle of liquor, a wide variety of cannabis products, and around 195 grams of cocaine. A 30-year-old Winnipeg man is in custody facing multiple charges which include trafficking.

Just hours after that, police stopped a taxi cab in Thompson following a drug investigation. The passenger was placed into custody, and officers seized around 140 grams of cocaine. A 28-year-old man from Duck Bay, just over an hour north of Dauphin, is in custody facing drug trafficking charges, as well as charges of possessing property obtained by crime.

None of the charges have been proven in court, and the RCMP say they continue to investigate.