Beaver May Have Caused Train Derailment 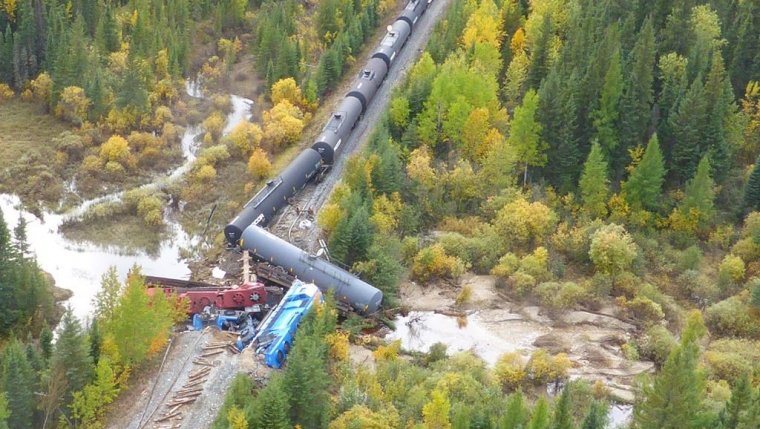 THOMPSON, Man. — A Transportation Safety Board investigator says beavers may have contributed to the train derailment in northern Manitoba that left one railway worker dead and another injured.

The train went off the tracks on a washed−out trestle bridge in a swampy area south of Thompson on Saturday evening.

Jerry Berriault, the board’s regional senior investigator, says the train was travelling around 40 km/h when it met with the washed−out piece of track.

The lead locomotive went off the track bringing along two locomotives behind it and four rail cars.

First responders have said the two workers were trapped inside the train for hours.

Berriault, who was on site west of Ponton for two days investigating, says there was high water in the area and signs of beaver activity.

"They’ve had heavy precipitation for spring and summer as well there was beaver activity in the area," he said. "So, the track washed out as a result of a significant amount of water."

He says the Transportation Safety Board will still have to look at other factors that may have contributed to the derailment on the Hudson Bay line.

The train cars carrying liquefied petroleum were damaged but none of the product was breached, he added. However, Manitoba Sustainable Development has sent in specialized recovery equipment to clean up diesel fuel leaking from the locomotives into the Metishto River.

Sections of the railway north of the recent derailment washed out in 2017 and the its previous owner, U.S.−based Omnitrax, had refused to make repairs.

Crews have been working since the sale to try to repair the railway, the only land link to Churchill, Man., a community of about 900 people on Hudson Bay.

Murad Al−Katib of AGT Foods, one of the Arctic Gateway Group’s partners, has said the group will not compromise speed for safety during the repairs on the northern section of the rail line to Churchill.

— By Kelly Geraldine Malone in Winnipeg.