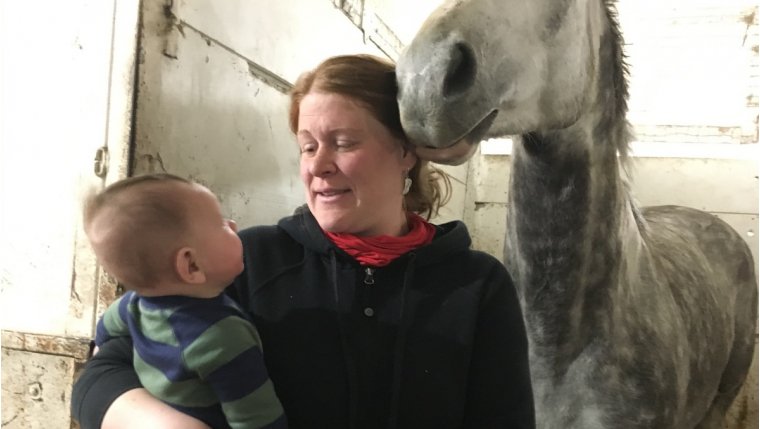 WINNIPEG - Jaime Hartman is a juggler. She wouldn’t describe herself that way, but when she lists off the responsibilities in her life, she’s lucky that having the ability to juggle the clock is one of her skills.

For one thing, she’s a 31-year-old single mom who, by herself, moved to Winnipeg from Saskatoon with her four-month old son Braxton. In Winnipeg, she bought a trailer in the backstretch at Assiniboia Downs and set up one of the busiest barns at the track. With more than 30 young thoroughbreds, many of them two-year-olds, she’s probably the busiest mom at the Downs. Might be the busiest mom in town.

“It is a big barn, a lot of two year-olds,” she said with a wide smile as she took a break for lunch in what’s known as the ‘kitchen’ at the local track. “They all turn into three-year-olds and then they’ll run for bigger money. And they don’t usually start racing much until the middle of the season. That’s OK. I like them. I like to see how far I can bring them along in a few short months.”

Hartman has been around horse racing her entire life. Her aunt was a trainer and her mother and father both owned race horses. Her aunt and her boyfriend, a jockey, lived in Jaime’s parents’ basement. She didn’t get up one morning and say, “I want to go to Marquis Downs and get into the racing business.” She has been around the race track, “One way or another,” her entire life.

“I grew up at Marquis Downs,” she said with a laugh. “I hung out with the race track kids and we’d hold our own races on the tarmac when the real races were going on. The track was my life.”

Her mom and her sister didn’t really want her to get into the business, but it was unavoidable. Last year, she took another unavoidable step. She decided to step up, leave home and set up shop at a bigger, more lucrative track. Her first step on the road to the Breeder’s Cup (someday) was to move to Winnipeg.

“I just made a decision to try a little bigger track with a little tougher competition,” she said. “I grew up in Saskatoon and was always around racing. I trained there for four years and then last year decided to try Winnipeg.”

“Las year was a learning experience so hopefully I learned a few things and can improve on them,” she said. “I really fluctuated in the barn last year. I was usually around the 20 mark, but at the end a trainer had to leave so I took care of his horses at the end so I finished with a lot. I work hard, but I have really good help. Really good help. Especially this year with the baby. But I’m really lucky. He sleeps during training hours and he’s a good sleeper. He likes being in the barn and he’s a pretty happy kid. I can’t complain. I was a little worried coming out here without having my mum to help me out because she’s back in Saskatoon. But he’s been perfect.”

Besides being a full-time single mom, Hartman puts in 8-12 hours a day in the barn. It’s been especially hectic during spring training as she sets up her barn for the upcoming 50-day meet, a meet that starts on Mother’s Day and runs right through to the middle of September.

“It varies,” she said. “It takes about 12 hours a day now because I have to set up the barn and stuff. But usually it’s in the morning for about six hours and then I come back in the afternoon for a couple of hours, maybe an hour and a half.

“It’s more than a job, it’s my lifestyle. It helps that I have a trailer on the grounds. I wanted to just have 12 horses this year with the baby, but then I kept getting calls, ‘I have this many horses,’ or ‘I have this many two-year-olds,’ ad I can’t say no. Many of my owners are from Saskatchewan and they supported me coming out here, so I won’t tell them no. So I’ve taken all I can take from them.”

Hartman is a perfect young trainer for the Downs. She has a lot of horses in her barn, but many of them are new horses from owners who didn’t send their thoroughbreds to Winnipeg last year. CEO Darren Dunn wants to add as many new horses as he can to the lineup each year and Hartman’s barn is a bit of a god-send.

“I have a few returning from last but many are new owners who weren’t here last year,” she said. “I just want to make my horses as happy as I can and if they’re happy, they’ll run well. It’s really exciting to see them come in to town in the spring and their all hairy and unfit. They’ve been eating all winter and now they have to work, so their grumpy. But the horses in my barn right now are happy and their working hard so for me it’s so far, so good.”