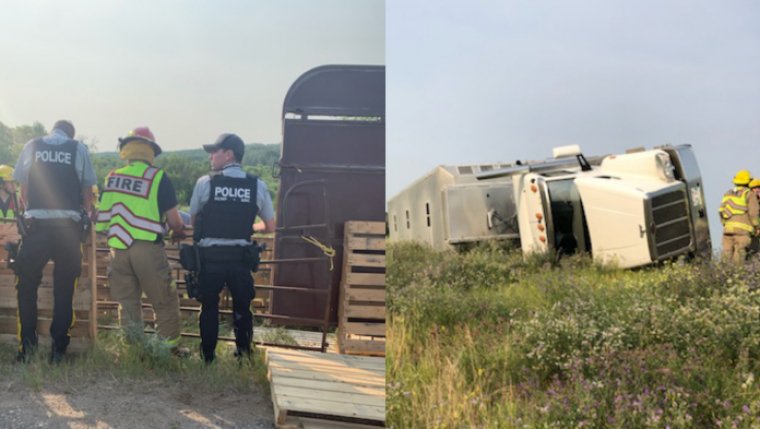 WINNIPEG - Manitoba RCMP are reporting three highway crashes in the province, two of them deadly, in the span of several hours. A 70-year-old man is dead after a head-on collision on Highway 1 near Winnipeg, while police had an unusual recovery operation following a semi-truck rollover that took place soon after.

Mounties say they received a report just before 5:30 Friday morning about a driver going the wrong way down the Trans-Canada Highway about 8 km east of Deacon’s Corner.

Just after 5:30 that morning, police were called to a fatal motor vehicle accident at the same location. Investigators explain a vehicle was travelling east in the westbound lane when it struck a westbound car head on. A 70-year-old man, the only occupant of the first vehicle, was pronounced dead at the scene.

A 30-year-old man from La Broquerie, who was driving the westbound car, was taken to hospital in Winnipeg with serious but non-life-threatening injuries. The westbound lanes were detoured for several hours that morning as officers investigated with the help of an RCMP forensic collision reconstructionist.

A few hours later, police responded to the rollover of a semi-trailer carrying approximately 500 pigs along Hwy 355 in southwestern Manitoba. Mounties say they herded the animals into another trailer after the truck transporting them hit the ditch. Investigators note that while the driver of the semi wasn’t injured, a number of pigs died in the crash.

Less than two hours after that, Westman RCMP reported a third collision, at the corner of Hwy 16 and Hwy 10, near the same highway where the second crash had occurred.