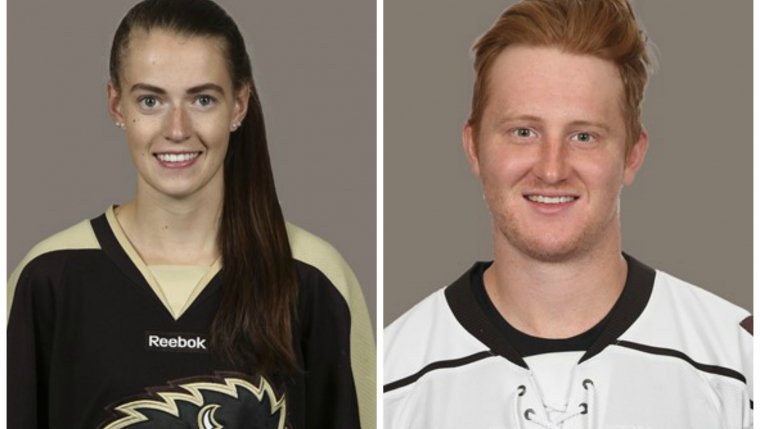 WINNIPEG — Thanks to prolific goal-scoring weekends, Zach Franko from men's hockey and Lauryn Keen from women's hockey have been named the Boston Pizza Bison Sports Athletes of the Week for the week ending December 3, 2018.

If there was ever a lesson in putting away a loss and coming back strong the next day, the Bison men’s hockey team taught it this weekend. After losing 7-0 on Friday to a solid Calgary team, the Bisons responded with a 3-1 win on Saturday, snapping a 12-game losing streak and heading into the holiday break on a winning note.

At the centre of the team’s success on Saturday was fourth-year forward Zach Franko, who scored twice and assisted once in the win.

With the team down 1-0 after a period, Franko assisted on an Adam Henry even-strength goal just five minutes into the second. He followed that up six minutes later with a goal of his own, scoring on the power play on what would eventually be the game-winner.

The Winnipeg native wrapped up an excellent game with another goal five minutes into the third, providing the Bisons some insurance as they upset the No. 9 ranked team in the country.

Franko, a student in Kinesiology & Recreation Management, now has ten points on the season for Manitoba (five goals, five assists), good for second on the team. Three of his goals have come on the power play, which leads the Bisons.

Bison men’s hockey are also on their holiday break. They resume action on the road on Jan. 4-5 against the Alberta Golden Bears. Their next home is Friday, Jan. 11 versus the Mount Royal Cougars at 7 PM.

In their last weekend series of the first half, No. 2 ranked Bison women’s hockey team showed no signs of slowing down on the road in Calgary. The Herd won both games this weekend, as fifth-year forward Lauryn Keen exploded for four of the team’s seven goals.

On Friday, the Manitou, MB native notched a hat trick, the second for the Bisons this season after Jordyn Zacharias achieved it on Nov. 9. She scored her first goal fifteen minutes in, cleaning up a big rebound off a Karissa Kirkup slapshot to get Manitoba on the board.

Keen followed that up with two quick power play goals in three minutes in the second period, deflecting a point shot on one and scoring on another rebound on the other. She finished a +2 in the 4-1 win.

On Saturday, Keen followed up her three-goal game with one more, scoring unassisted and shorthanded in the second period to put her team up 2-1. They would eventually win 3-2.

Bison women’s hockey have now won ten of their last 12 games heading into the break. Keen, a student in the Faculty of Agriculture, leads the team and is third in Canada West with 17 points (eight goals, nine assists) and is averaging 1.06 points per contest.

Bison women’s hockey are now on their holiday break. They resume action at home on Jan. 4-5, taking on another top team in Canada West and U SPORTS — the Alberta Pandas.