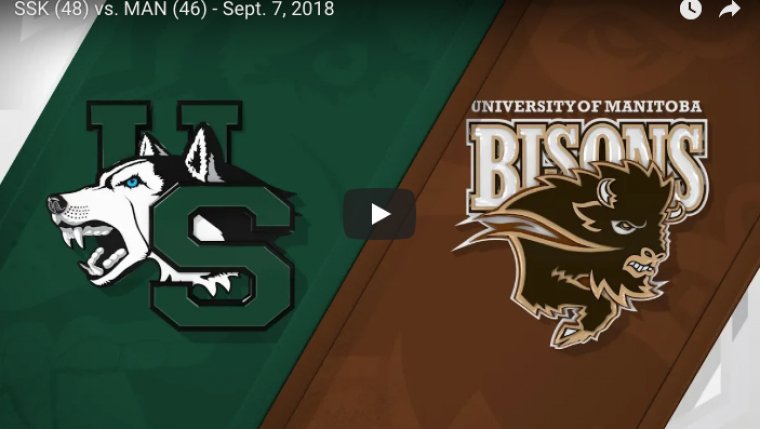 In a short season, close losses hurt that much more. For Manitoba, it’s been two in two weeks, as a high-scoring game Friday night against rival, #10-ranked Saskatchewan ended in a 48-46 loss.

This, after a loss to #6-ranked UBC that came down to the last five minutes, as a Thunderbirds score gave a close game its 30-20 final.

True to a great rivalry, Manitoba is now 17-16 against the Huskies over the last 23 seasons. With the loss, they fall to 0-2 this season, while surprising Saskatchewan — ranked sixth in the preseason Canada West coaches’ poll — improve to 2-0.

“I loved our fight, I mean how could you not love our fight?” said Bisons head coach Brian Dobie. “The UBC game was really a three-point loss and this one was a two-point loss. I mean, that hurts, but we’re 0-2.”

The centerpiece for the Bisons in their home opener, attended by 2,175 fans at Investors Group Field, was quarterback Des Catellier. Throwing the ball early and often, he finished with 425 yards on 33-for-48 passing. Unfortunately, his four touchdowns came aside three interceptions, one of which was run back for a touchdown.

Scoring wasn’t hard to come by in this game, beginning in the first quarter. Bisons receiver Macho Bockru had the first major of the game, receiving a five-yard pass from Catellier with 10:48 left in the first to put Manitoba up 7-3. After a 17-yard Joey Trumpy receiving touchdown at the end of the quarter, Manitoba answered with their receiver — as fifth-year Dylan Schrot continued his scorching play from Week 1 with another touchdown. Schrot had 87 yards on nine receptions in the game, following up his 143-yard performance against UBC.

Bettering him was Bockru, though, who had the best game of his three-year tenure with the Herd, tallying a game-high 185 yards and two touchdowns on nine catches, including a long reception touchdown of 68 yards early in the third quarter to bring the Bisons within seven.

“Everyone was executing and doing what they had to do,” said Bockru. “It’s a shame it didn’t go our way in the end but we play like that next time, it’ll go our way.”

Scoring just moments after that, fifth-year Schneider Charles grabbed a tipped ball and ran it to the house, tying the game at 34.

Then, Manitoba’s momentum was stymied. The critical play of the game was one of Catellier’s interceptions, as he missed Huskies corner Payton Hall coming on a double with Manitoba in the red zone, and the Saskatchewan half back ran it back 90 yards for the Huskies score. At that point, Manitoba was trying to take a lead. It ended up being 48-37 for Saskatchewan.

After that point, Manitoba continued to battle. A Brad Mikoluff field goal with 3:23 left, one of four boots on the evening, made it a one-possession game at 48-40. On their last drive of the game, Manitoba got into scoring position thanks to a brilliant running play by their quarterback.

Then, fifth-year Dylan Schrot grabbed a receiving touchdown to make it 48-46. Needing to go for two, Catellier found receiver Shai Ross open in the middle of the end zone. Unfortunately, Ross couldn’t come down with the ball.

That gave the game its final score, as the Huskies now find themselves unbeaten in the young 2018 season. Leading the charge for Saskatchewan was fifth-year running back Tyler Chow, who had a game-high 134 yards on 18 carries. At quarterback, fifth-year Kyle Siemens had 306 yards passing, four touchdowns, and one interception (24-for-35).

With that, Manitoba looks ahead to an exciting home-and-home series against Alberta, with the first game going at Investors Group Field at 2 p.m. on Saturday, September 15. Tickets are available on Ticketmaster; University of Manitoba students, high school students, and fans 12-and-under get in free.