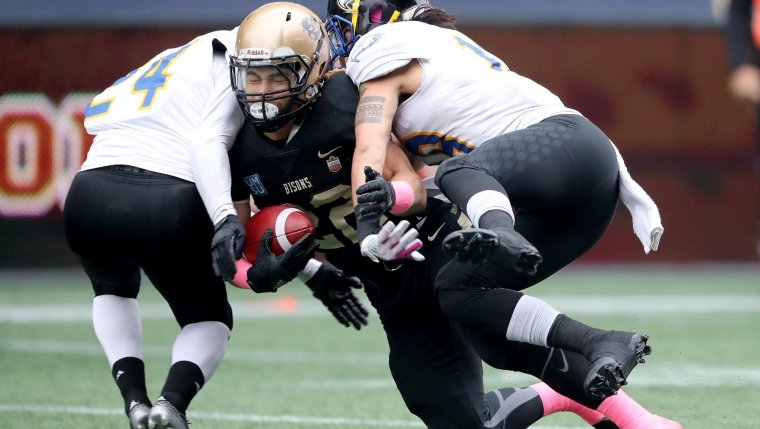 Riding the shoulder of their backup quarterback, the Manitoba Bisons came out strong in Week 8 against no. 10 ranked UBC. The story shifted in the second half, though, as the Thunderbirds showed their aggression and got the win, 38-34 in overtime at Investors Group Field.

The win secures the second seed for UBC (5-3), as they’ll host Saskatchewan (5-3) in the Canada West Semi-Final. Manitoba (3-5) will play their semi on the road against no. 3 ranked Calgary.

The Thunderbirds were led by their quarterback, as Michael O’Connor had a stellar second half to finish 36-for-49 for 467 yards, four touchdowns, and one interception.

With Des Catellier out due to a lower body injury, Manitoba found an unlikely hero in quarterback Jamie Ybarra, who went 20-for-26 for 396 yards, two touchdowns, and two interceptions.

“Nobody expected your quarterback, who you literally brought in to run scout for you, to put up 31 points against one of the top teams in the country in a half,” said Bisons head coach Brian Dobie.

Ybarra did just that to open the game. He connected with Dylan Schrot for an 11-yard score to open proceedings. The touchdown was Schrot’s sixth of the season, as he finishes one shy of the school record — owned by Mike Faisthuber and Nic Demski. Schrot also led Manitoba in receiving, with a season-high 173 yards on seven receptions, with his touchdown.

While UBC would answer with an O’Connor connection to Trey Kellogg, the Bisons rolled off 21 straight points in response. First, it was Jesse Walker running it in to close the first quarter from the wildcat formation. Then, running back Victor St. Pierre-Laviolette scampered in a 17-yard touchdown. Finally, Ybarra made a brilliant pass to the back of the end zone to Shai Ross, who tapped the toes to make it 28-7.

Manitoba would go into halftime up 31-13.

From there, though, it was all Thunderbirds. O’Connor found his favourite target in Trivel Pinto for a 26-yard touchdown five minutes into the third frame. Then, lightning struck twice, as Pinto caught another score with 7:30 left in the fourth. A two-point convert tied the game at 31. Pinto would finish with 184 yards on 12 receptions to go with his two scores.

In the first overtime, Manitoba struck first off a 50-yard boot from Brad Mikoluff. The Thunderbirds did one better, though, as Ben Cummings caught a pass out wide from O’Connor to seal the win.

“They were more aggressive,” said Dobie. “Jamie [Ybarra]… got sacked a couple of times or had to throw the ball away. They came with more pressure, more often and that was smart on their part.”

Manitoba now travels to Calgary for the Canada West Semi-Finals on Saturday, Nov. 3 at a time to be determined. UBC will host Saskatchewan on the same day.