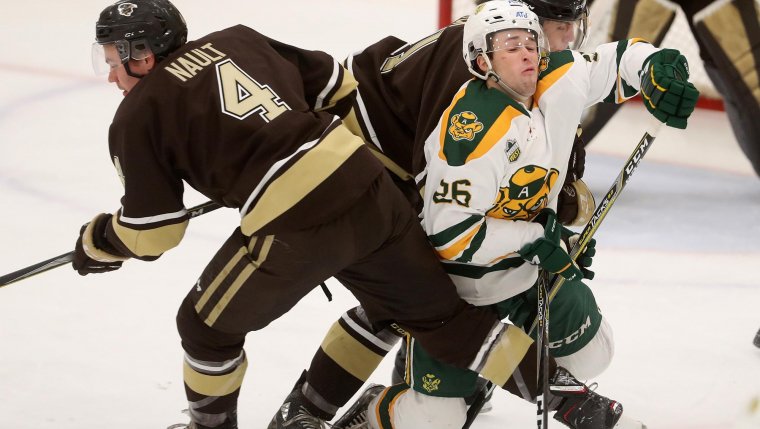 WINNIPEG - A three-goal first period was enough for the No. 2 ranked Alberta Golden Bears, as they got a weekend split against the Bisons with a 4-1 win on Saturday night at Wayne Fleming Arena.

Defenceman Jason Fram opened the scoring for the visitors, finishing off a nice feed from forward Cole Sanford — who had both goals for the Golden Bears on Friday night. The tally came mere seconds after a Manitoba penalty had ended.

Alberta added to their lead just under a minute-and-a-half later, as forward Taylor Cooper went top shelf right in front of Manitoba goalie Byron Spriggs. The goal was set up by another solid pass, this one coming from captain Riley Kieser.

The Bisons would take their second penalty at 7:46 and the Golden Bears made them pay, as forward Grayson Pawlenchuk was able to gain solid positioning in front of the Manitoba crease and tapped a shot past Spriggs for the visitors’ third power play goal of the weekend.

“We talked about that before the game, that we’ve got to be ready. As good as we played last night we had to be better today right from the start of the game and we weren’t,” said Bisons head coach Mike Sirant.

“It took us a good ten minutes before we started getting into the game and at that time we were already down. What we will take out of this one is that when you win that first one, you cannot be satisfied.”

The home side had trouble generating sustained momentum in the opening frame but did have a few solid chances. The first came roughly five minutes in, as forwards Kamerin Nault and Devon Skoleski broke in on an odd-man rush but couldn’t finish off a give-and-go.

Manitoba continued to push the pace in the final five minutes of play, with captain Brett Stovin generating a solid chance from the right wing on a rebound, however Alberta goaltender Zach Sawchenko was able to make the save.

Big-time stops were the story of the middle frame as both goaltenders flashed their skills on multiple occasions.

Alberta found themselves on a five-on-three in the opening four minutes of play after the Bisons took two minor penalties less than 40 seconds apart. Sanford had an excellent chance to increase the Golden Bears lead to four with the two-man advantage, but was denied by the blocker of Spriggs.

The Golden Bears took three minor penalties of their own in the second period, however Sawchenko was up to the task, with his most notable save coming on Manitoba’s second power play, a right blocker stop on a shot from in tight by Stovin.

Alberta would reward their goaltender with 7:18 to play, as forward Luke Philp intercepted a pass in the neutral zone and went top shelf from the right slot to give the visitors a four-goal cushion heading into the third.

Sirant did some tinkering to his lineup in the final 20 minutes of play, hoping to create a spark. Dasan Sydora replaced Spriggs in net, while all four lines were altered in some fashion.

The newly-formed line of Jonah Wasylak, Skoleski and Liam Bilton created the first solid chance for Manitoba 2:30 into the third, as Wasylak had a solid chance from the side of the net but was turned away by Sawchenko.

Alberta would test Sydora roughly five minutes later, as they broke in on a two-on-zero, however Sydora was able to stop forward Lukas Nickels.

Sydora would make continue to make multiple big-time saves just under halfway into the contest, denying the visitors on their second five-on-three of the game.

Manitoba fed off the play of the net minder, solving Sawchenko with just under five minutes to play, as defenceman Mackenzie Dwyer came up in the rush and blasted a shot into the back of the net.

It was too little too late for a comeback however, as the visitors held on for the 4-1 win.

With the win, the Golden Bears advance to 2-2-0, while Manitoba falls to 2-2-0. Next up for the Bisons is a home weekend against Regina on Oct. 19-20, while Alberta will travel to take on Mount Royal.