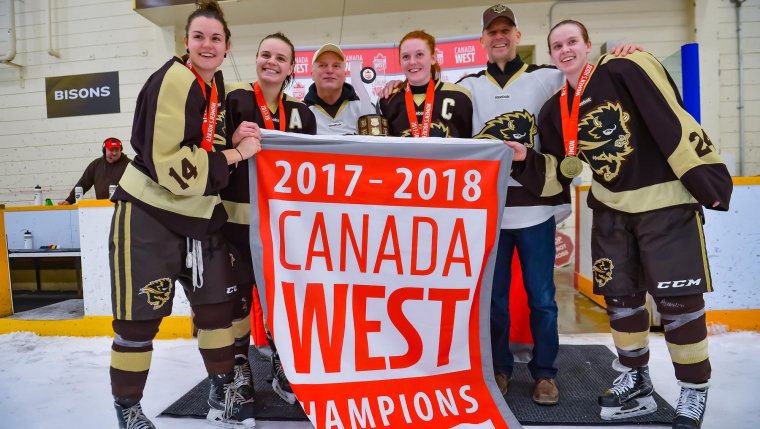 WINNIPEG - This past spring, the Bison women’s hockey team took home the it's first U SPORTS national title. Now, the team will hang their Canada West and U SPORTS championship banners at this seasons home opener October 5 at 7:00PM at Wayne Fleming Arena versus the Calgary Dinos.

On top of the banner raising ceremony, the October 5th game will celebrate Girls’ Hockey Day and officially drop the puck on a season where the Bisons look to repeat last year’s conference and national titles.

On October 12-13, they’ll get a rematch against the Alberta Pandas in Edmonton — the first time the two teams have faced each other since a four-overtime classic in Game 3 of the 2017-18 Canada West semi-finals.

The Pandas and Bisons will meet again on January 4-5, 2019 at Wayne Fleming Arena.

Manitoba will get a rematch of the 2017-18 Canada West Final on November 23-24, as they meet the Saskatchewan Huskies at Wayne Fleming Arena. The two teams then meet again in Saskatoon on February 8-9, the last weekend of the regular season.

The Bison men’s team will start the season on the road, playing the Calgary Dinos on September 28-29, 2018.

After a conference bye week, they’ll play their home opener at Wayne Fleming Arena on October 12, taking on the Alberta Pandas for the first game of a two-game weekend series. That opener will also be Alumni Night and Minor Hockey Night, celebrating past and future Bison hockey players.

On October 26-27, Manitoba will get their first matchup with the Mount Royal Cougars, a rematch of the Canada West quarter-finals in 2017-18 (Mount Royal won the best-of-three series 2-0). The two teams will also meet at Wayne Fleming Arena in the second half of the season, January 10-11, 2019.

The Bisons finish their regular season against another rival, with a weekend series at home against the Saskatchewan Huskies on February 8-9. The Canada West playoffs begin the following weekend, February 15-17, as the top six teams in the conference advance. The 2019 U SPORTS University Cup takes place in Lethbridge from March 14-17, 2019.