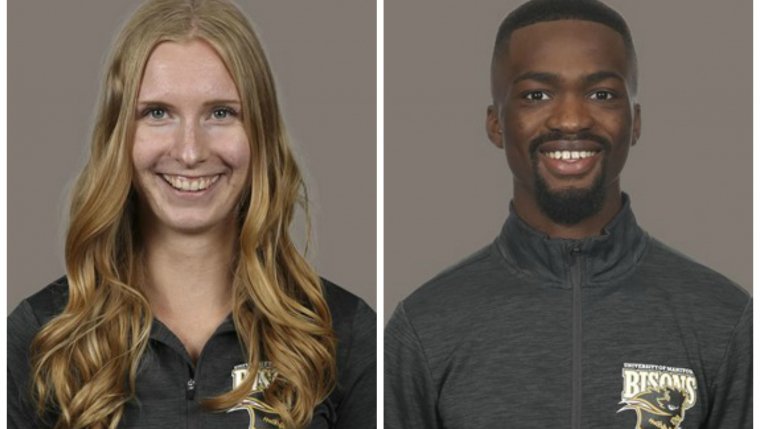 WINNIPEG — After auto-qualifying performances at the South Dakota State University (SDSU) Classic, Tegan Turner and Oyinko Akinola from Bison track and field have been named the Boston Pizza Bison Sports Athletes of the Week for the week ending February 12, 2019.

The No. 9 ranked Bison women's track and field team had members on the road this past weekend, as they visited Brookings, South Dakota for the South Dakota State University (SDSU) Classic.

Battling teams from the upper Midwest, fifth-year Tegan Turner had a performance that will set her apart from competition north of the border.

Turner became the third Bison athlete to auto-qualify for the 2019 U SPORTS Track & Field Championships at the University of Manitoba, finishing first in the 60m dash in a time of 7.52 seconds.

Her 7.50 in the semi-finals was more notable, though, as it stands as her top time of the 2018-19 season and puts her under the 7.57 U SPORTS standard. It also gives her the third-best time in the country this season.

Turner finished second at nationals last year in the 60m, running a 7.46. Her 7.43 at the Canada West Championships in 2017-18 came just 0.01 short of her personal and conference record in the event.

Fourth-year Oyinko Akinola also had a memorable weekend at the SDSU Classic, becoming the fourth Bison athlete to auto-qualify for a U SPORTS event.

Akinola finished third in the men's triple jump, recording a top distance of 14.64 metres. This mark narrowly surpasses the U SPORTS standard of 14.63m, which qualifies him for the 2019 U SPORTS Track & Field Championships at the U of M.

The mark also leapfrogs Akinola into second in the nation in the triple jump, behind only Femi Akinduro of the University of Toronto, who has a 14.71m mark this season.

A captain on the No. 4 ranked Bison men's track and field team, Akinola is also top four in U SPORTS in the men's high jump (2.04m) and the men's long jump (7.05m), all events he hopes to defend at nationals this year.

The Bison track and field teams host their Bison Grand Prix #2 on Wednesday, February 13 at the James Daly Fieldhouse.