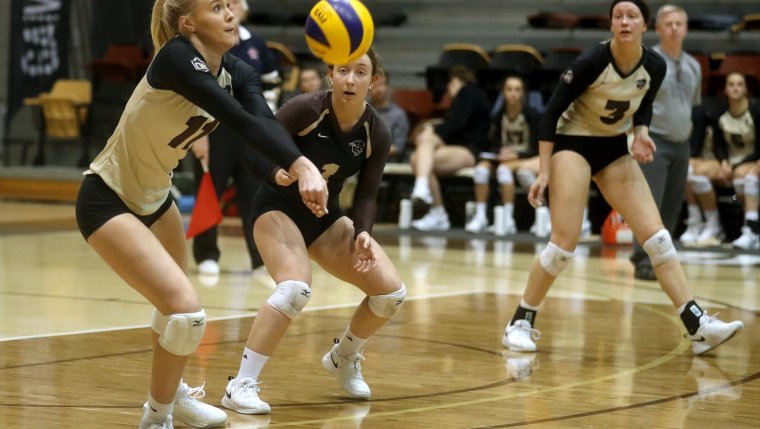 The win earns a weekend split for Manitoba after losing in four sets to the WolfPack on Friday evening.

Abbott was great in her return from an early season injury, leading all players with 19 kills, adding 16 digs and three blocks. Koswin had 15 kills and five blocks in support for Manitoba.

“It was so important to bounce back after last night. There was a total of five points difference last night in the loss, so I was proud of how we came back today,” said Bisons head coach Ken Bentley.

Thompson Rivers was led by Olga Savenchuk in the loss, who had 17 kills and 13 digs. Kendra Finch had 16 kills and ten digs.

The opening set on Saturday was a continuation of the third and fourth sets on Friday. A narrow WolfPack lead to start was balanced by a five in six points stretch by Manitoba, as they fed Kearley Abbott on the right side to take an 11-9 lead.

Thompson Rivers responded, though, with four straight points — including two kills from Kendra Finch — to bounce back. The set extended late, as Thompson Rivers fought off a combined six set points, eventually ending with a kill by Savenchuk, one of seven in the set (30-28).

Despite another narrow set loss, Manitoba bounced back in the second, taking a 12-8 lead off four straight points. After a 16-14 technical timeout lead, Jocelyn Koswin attacked from both the outside and the middle for four kills in the set, building Manitoba’s lead. A Laura Findlay kill provided the set point punctuation (25-22).

“I thought we did a great job handling ourselves there,” said Bentley on the second set turnaround. “We could’ve said ‘oh, another set that we lost that was close’ but we did a really good job in the second of moving on. That was probably the key to the match, how we disposed of that and cracked on.”

The Bisons kept their momentum going in the third. Six straight points midway through the set — including a kill for both Abbott sisters — created separation of 15-9. Late in the set, the WolfPack put a bit of a scare into proceedings, scoring seven straight points to get the Bisons lead down to 22-20. Manitoba responded, though, as Tori Studler made a critical stuff block to give the Herd set point, which they would capitalize on (25-20).

In the fourth, it was all Manitoba and all Kearley Abbott. Thompson Rivers got off to a 7-4 lead, but four kills from Abbott dragged the Bisons back into a 12-12 tie. After the tech timeout, two Abbott kills gave Manitoba a 19-17 lead, and they didn’t look back from there.

The flashbulb moment came near the end, when Abbott dove into the scorer’s table to get a dig before finishing a long rally with another kill. She would finish with seven kills in the set to finish the match in four.

“She lit it up, she was a stud today,” said Bentley. “We’re just happy to have her back and, considering how long she’s been off and the severity of her injury, she was really impressive today.”

The Bisons have another home series next weekend against the UBC Okanagan Heat, playing on Jan. 11 at 7:45 p.m. and Jan. 12 at 5 p.m. Thompson Rivers returns home to play Mount Royal. All the women’s volleyball action can be seen on CanadaWest.TV.