Saskatchewan Shuts Out Manitoba in 3-0 Win 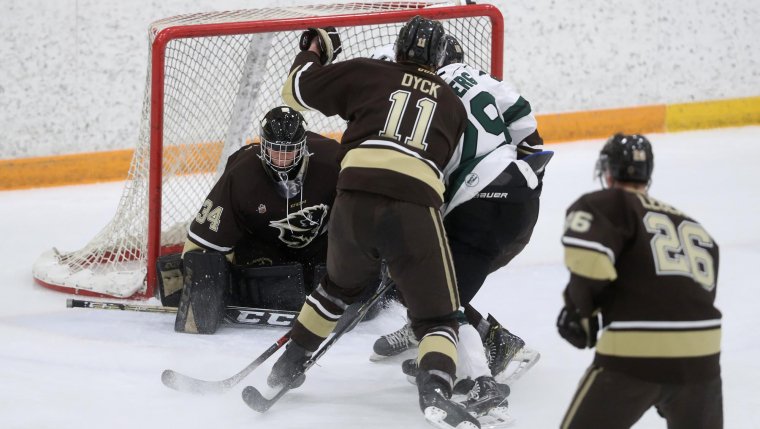 WINNIPEG— Three unanswered goals were enough for the Saskatchewan Huskies to finish their regular season play on a high note, beating the Manitoba Bisons 3-0 on Saturday afternoon (Feb. 9) at Wayne Fleming Arena.

Huskie Travis Child effectively shut out Manitoba with 18 saves. This game was only Child’s fifth of the season and his third shutout. With the win, his record is 5-0. Bisons goalie Byron Spriggs chocked 31 saves.

“Sometimes when you have a short turnaround, it’s a little difficult and first place is on the line for us today,” said Huskies head coach Dave Adolph. “I thought it was an outstanding effort from our guys. Especially from our young goalie.”

With the weekend sweep, Saskatchewan finishes their 2018-19 regular season with a record of 24-3-0 and the top seed in Canada West. Manitoba’s final record is 6-19-2.

“The effort was there, there’s no question we competed hard,” said Bisons head coach Mike Sirant. “Tough luck around the net, and overall we aren’t satisfied with it because we didn’t win but our guys competed and put in a good performance today.”

Saskatchewan’s first major chance came six minutes into the game, when a Spriggs save left an empty net and a massive rebound. However, a last-minute defensive save by Zajac prevented a goal.

Just under eight minutes into the first, Donovan Neuls fed a pass from Carter Folk past Spriggs’ five-hole, marking the first goal of the night. An assist also went to Jaimen Yakubowski.

Carson Stadnyk chipped the lone goal of the second six minutes into the period. Thanks to a pass from Collin Shirley, a wrist shot with just enough of a punch to make it over Spriggs’ left pad. That gave Saskatchewan a 2-0 lead, which they sustained heading into the third.

In the third period, Manitoba held Saskatchewan off until Parker Thomas sent the puck soaring from the point, right into the left back pocket of the net just two seconds into a power play. The goal came at 12:04 into the period, and both Sam Ruopp and Logan McVeigh had assists.

Sirant is proud of how Manitoba played this weekend and in the 2018-2019 season.

“We can say that our guys never quit. Every morning they came to the rink prepared to work and tried to get better,” he said.

Meanwhile, Saskatchewan’s Adolph says the key to success in the post-season is for his team to take advantage of the bye and get some rest.

“The luxury you have with the bye now is we can rest here for a week and get ourselves situated,” he said. “You want to make sure you have as much energy as you can because you’re going to be playing an opponent who is coming off a best of three.”

This was the last game for Manitoba of the 2018-19 season. For Saskatchewan, they’ll get a quarter-finals bye and will face whoever moves on to the semi-finals on Feb. 22 at home. That game will start at 7 p.m. CST, and you’ll be able to watch it live online at CanadaWest.TV.