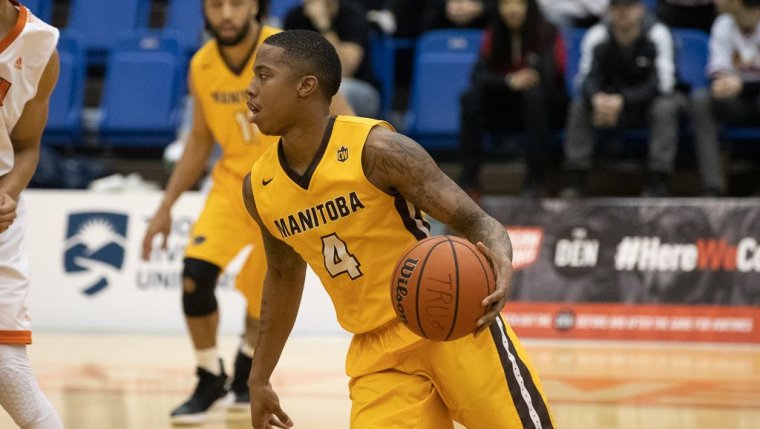 WINNIPEG — The 2018-19 Canada West men’s basketball all-star and all-rookie teams were announced by the conference on Thursday, with Bison fourth-year guard Rashawn Browne being selected as a Third Team All-Star.

This is the first all-star selection for Browne in his Bisons career and the fourth consecutive season that a Bison men’s basketball player has been named a conference All-Star (Justus Alleyn – First Team in 2017-18, Second Team in 2016-17; Keith Omoerah – Second Team in 2015-16).

Browne was prolific at getting to the free throw line, with a 69-for-94 line good for the sixth-most attempts in Canada West. His 116 total assists were also third in the conference. Browne played and started in all 20 games for the Bisons.

The Faculty of Arts student scored his season-high in the opening weekend at Brandon, with 32 points, nine rebounds, and seven assists in a 101-100 loss to the Bobcats.

“Rashawn was certainly our leader offensively this year, leading us in scoring and assists,” said Bisons men’s basketball head coach Kirby Schepp. “He was the catalyst for our offence right from the start of the year to the end. He certainly provides leadership for us on and off the court and we’re very proud of the fact that he’s being recognized and deservedly so.”

“He had a great burden in terms of minutes and responsibility for us, he had the ball in his hands a tremendous amount and never once shied away from that responsibility and did a good job leading us.”