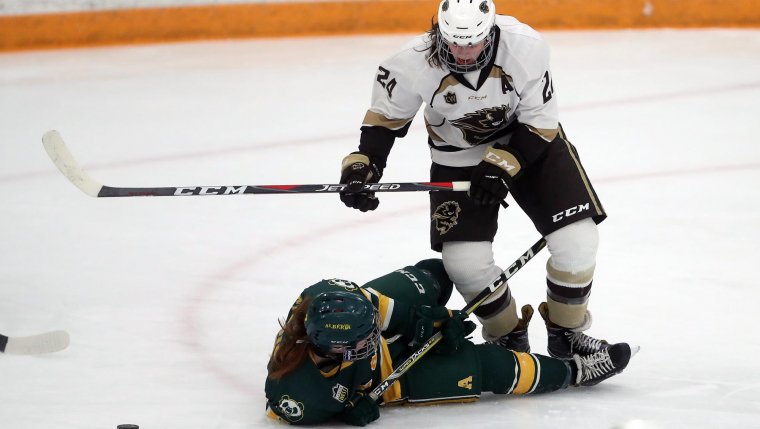 WINNIPEG — An Abby Benning goal with 2:28 to go in the second overtime secured a 1-0 win for the No. 4 Alberta Pandas, as they outlasted the No. 2 Manitoba Bisons on Saturday afternoon at Wayne Fleming Arena.

It was the second time this year that the Bisons have fallen in double overtime, coming up just short against Saskatchewan at home during the fall. Manitoba also had just one power play, compared to six for Alberta.

Both sides had good looks in the opening 20 minutes, flexing their muscles on both the forecheck and in transition but were unable to find the back of the net.

Manitoba’s Natasha Kostenko and Mekaela Fisher each did an excellent job outmuscling their opponent and generating some offensive pressure, including a shift with seven minutes left that was started by the former. She pinched hard on the glass, kept the puck in and eventually got the puck out to Fisher near the slot, however she was stopped by the blocker of Alberta goalie Halle Oswald.

“[Kostenko] has a willingness to go to the front of the net and likes that job and is effective in that role,” Bisons head coach Sean Fisher said postgame. “Unfortunately, we only had 58 seconds of power play time today, so we didn’t really get to utilize her there as much as I would’ve liked to.”

Alanna Sharman and Jordyn Zacharias also sped in on a two-on-one a few minutes prior, but Sharman’s shot went just high.

On the Alberta side, it was forward Lisa Lloyd who made her presence felt with a few big steals in Bisons territory. The most notable occurred 11 minutes in as she got a good look from near the half wall, however Manitoba netminder Lauren Taraschuk was up to the task.

Manitoba started the second period on the penalty kill, however it was their unit that had arguably the best chance of the period, as Sharman sped into the Pandas zone and let off a wicked wrister that beat Oswald but not the crossbar.

After some more tremendous back-and-forth action, Alberta’s top line of Autumn MacDougall, Kennedy Ganser and Alex Poznikoff began to get to work. The trio has combined for 57 points this season and had an excellent opportunity eight minutes in, as MacDougall fed Poznikoff right in front, but Taraschuk was there to make the best save of the night, sliding from her left to right to make an outstanding stop with her pad. It was even more impressive considering the fact that Taraschuk had raced out of her net seconds earlier to move a vacant stick away that had been dropped earlier on.

The back-and-forth action continued in the third period with both goalies standing their ground.

Manitoba’s best chance came from Sharman, who used her body to create space, but was stopped in tight by Oswald.

The Pandas had multiple chances to crack the scoreboard in the final three minutes, as they ended the contest with an extended two-man advantage after three Manitoba infractions. Ganser had Alberta’s best chance in the final minute sneaking backdoor, but Taraschuk yet again made a phenomenal save moving from her right to left to send the game to overtime.

“That was the form that we saw from [Taraschuk] towards our run there at the end last year,” Fisher said, “I know she wasn’t happy with a couple there yesterday and I think a ticked off Lauren Taraschuk is usually a dangerous Lauren Taraschuk.”

The Pandas controlled the puck for the majority of the four-on-four overtime session, with their best chance coming on a two-on-one, as Amy Boucher sped in but was denied by Taraschuk.

The Bisons best opportunity came off the stick of defender Megan Neduzak, but her slap shot from the point was denied by Oswald.

Manitoba started the second OT on a penalty kill, however their unit once again shut the door. On the other end, Sharman and Zacharias once again connected on a two-on-one but couldn’t cash in.

Alberta would close the contest out with two and a half minutes left though, as Benning cycled through the slot and took advantage of a misplay on a switch, beating Taraschuk low blocker side.

With the win, Alberta advances to 12-3-3-0 while the Bisons fall to 10-4-2-2. Next up for the Pandas is a home tilt against UBC, while Manitoba will travel to face Mount Royal.