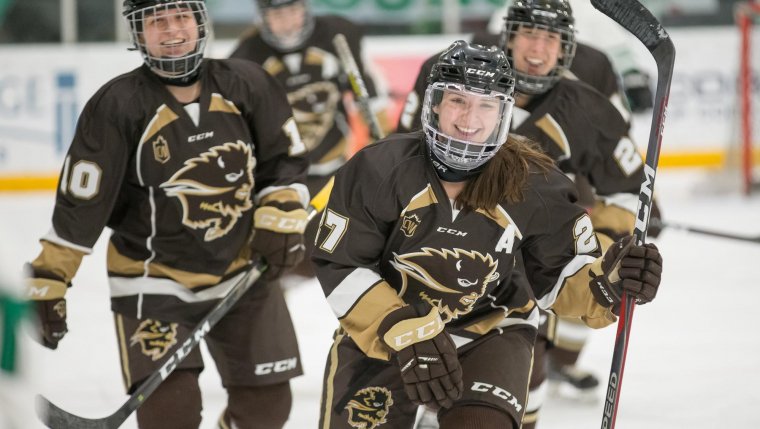 SASKATOON - Alexandra Anderson's tally 34 seconds into the third period stood up as the game-winning goal to help the Manitoba Bisons defeat the Saskatchewan Huskies 2-1 on Friday, Feb. 8 at Merlis Belsher Place.

Jordyn Zacharias opened the scoring with her 11th goal of the season at 11:55 of the first period, while Anderson's third-period tally proved to be the difference in the game for the visitors. Sheridan Oswald, Brielle Dacquay-Neveux and Lauryn Keen chipped in assists in the win for Manitoba.

Emily Upgang scored the lone goal of the game for Saskatchewan, with Brooklyn Haubrich and Kayla Kirwan recording assists.

2017-18 Canada West Rookie of the Year Lauren Taraschuk turned aside 31 of 32 shots on the night for the Bisons and was named the game's first star. Taraschuk is now 7-0-0-1 in her last eight games.

Jessica Vance stopped 13 of 15 shots fired her way on the night for the Huskies.

With the win, Manitoba moves to 16-4-4-3, as they continue to eye the opportunity of having home ice throughout the entirety of the Canada West postseason. The defending conference and national champions will need a sweep, and a Calgary Dinos win over the Alberta Pandas in order for a chance to welcome the west to Wayne Fleming Arena.

Saskatchewan moves to 10-10-5-2 on the season with the loss. The Huskies are locked into the fourth spot in the Canada West, which assures them the opportunity to host quarterfinal action at Merlis Belsher Place. However, who they match up with has yet to be determined. They will either welcome the UBC Thunderbirds or Mount Royal Cougars in a best-of-three series next weekend.

The Bisons were presented with a glorious opportunity to open the scoring in the early stages of the first period with a five-on-three powerplay that lasted over a minute and a half. However, Vance and company were able to hold off the Bisons. With the successful kill, Saskatchewan's penalty-kill moved to 95 per cent on home ice this season.

But it was all for nothing, as minutes later, Manitoba got the opening goal they were looking for. Oswald set up Zacharias and the 2017-18 Canada West All-Star unloaded a rocket from inside the slot which ricocheted off the post and past Vance to give the Bisons the early lead.

Saskatchewan tied the game when Upgang deflected Haubrich's wrister with 25 seconds remaining in the opening frame. With the goal, Upgang registered her second marker in as many games, after the third-year forward scored the lone goal in last Saturday's loss to Mount Royal.

Saskatchewan were rewarded late in the frame for their solid first period effort, after outshooting Manitoba 12-7 in the opening 20 minutes.

The second period provided back-and-fourth action with neither team able to establish steady offensive zone time. The Huskies outshot the Bisons 9-4 in the second frame.

The final frame opened with a bang, as Anderson wired a wrister overtop the shoulder of Vance to give Manitoba the lead. The tally extends the fifth-year defenceman's point streak to four games, with two goals and two assists during that stretch.

The Huskies took a time out with 1:04 remaining in the third period in an attempt to draw up a late equalizer, but Taraschuk was able to make several saves in tight off shots from Bailee Bourassa and Haubrich. Despite having an extra-attacker with Vance on the bench, Saskatchewan was unable to muster up an equalizer as the visitors escaped with the victory.

Saskatchewan and Manitoba will conclude their regular season campaign at 5:00 on Saturday night at Merlis Belsher Place.