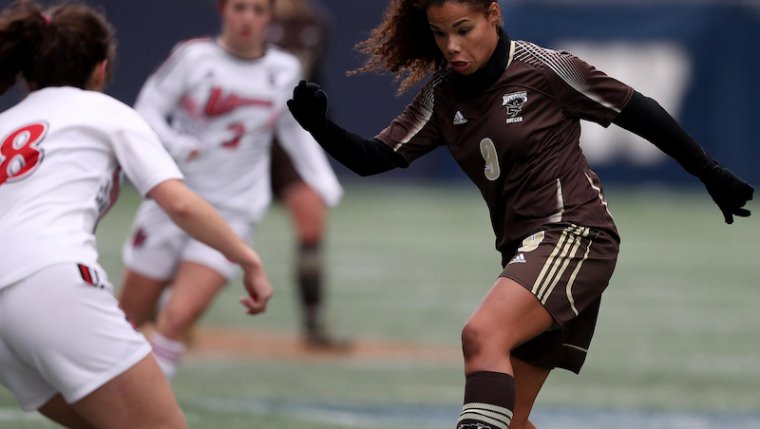 OTTAWA — For the first time since 2009, a Bison women’s soccer player has been named to a U SPORTS All-Canadian team. First-year midfielder Nicole Davis was named to the All-Rookie Team late Wednesday, with the announcement coming at the U SPORTS Women’s Soccer Championship banquet, hosted by the University of Ottawa.

Bison alum and two-time Olympic bronze medallist Desiree Scott is the only other player to be named to a U SPORTS All-Canadian team, when she was selected to the First Team in 2009.

Davis, 18, becomes the first Bison to be named to the U SPORTS All-Rookie team since its inception in 2017. The Winnipeg native was named at the midfield position after a three-goal, two-assist season — including one game-winning goal. She had seven shots on goal and started all 14 games for Manitoba, who finished the season 6-5-3.

“This is a wonderful accomplishment in [Nicole’s] young Bison career,” said Martinez Lagunas. “She impressed with her speed, vision of the game, dribbling and passing skills as well as her finishing ability and strength to contest 50/50 balls.”

“I am so happy to see the great success and enjoyment she experienced this year, especially when she was about to quit soccer before starting University. I am so glad that we convinced her to remain in the sport and I am confident that she will continue to excel. Our team staff members and I look forward to help her out to continue improving her game and skills in the upcoming years with our team.”

For a video of Davis’ season highlights, click here.