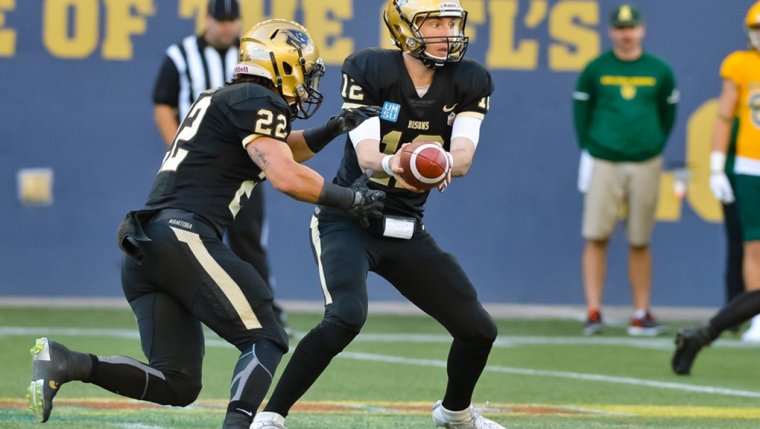 WINNIPEG - Manitoba Bisons had a 19-point fourth quarter to tie the game, but it was a record-setting throw by Regina’s Noah Picton that ended the game.

Regina quarterback Noah Picton made the record books this weekend. His 35-yard touchdown pass to Kyle Borsa in the first overtime gave him the record for most career passing yards, while also giving the Rams a game-winning touchdown.

With 296 yards passing, in front of 1,291 fans in Winnipeg, fifth-year Picton passed former Sherbrooke QB Jérémi Roch and now has 11,497 career passing yards — a new hallmark for U SPORTS football.

The win also improves Regina to 3-2, while Manitoba loses their Homecoming Game and falls to 2-3.

Picton’s throw to Borsa was a momentum-stealer for Regina, as the Bisons made it three straight weeks with a flurry of scoring in the fourth quarter. After a relatively tame first half — ending in the Rams leading 11-6, then opening that lead to 25-8 with 7:13 left in the fourth — the Bisons finally found pay dirt.

With just under five minutes left, Bisons quarterback Des Catellier found Shai Ross with a looping pass, getting the Herd within ten. After some a pair of strong defensive stands from Manitoba, the Bisons got the ball back with two minutes left.

Then, with just 48 seconds left, Catellier found Macho Bockru for a 37-yard touchdown reception to tie the game at 25. Catellier would finish 22-for-35, with 341 yards, three touchdowns, and an interception.

Though the Bisons had a late opportunity to finish things off with a near-runback by Marcel Arruda-Welch, the game went to overtime.

Regina opened with possession, quickly scoring on the Picton pass to Borsa. Picton would finish 20-for-30, with 296 yards, two touchdowns, and one interception. In addition to his game-winning receiving TD, Borsa led all players in rushing yards, running 16 times for 128 yards and one touchdown.

Responding, Manitoba worked the ball down to the 16-yard line, when Catellier found Shai Ross for his second touchdown reception of the game. Along with his scores, Ross would finish with 62 yards on five catches.

“I had a short route and the guy was playing the sticks so I converted it to a fade. Des threw a great ball,” said Ross.

A contentious decision followed, as Manitoba opted to try to win the game with a two-point convert. Set up at the five, Catellier’s pass was knocked down at the line, giving the game its final score.

The narrow loss is another heart-breaker for Manitoba, who have the best point differential of the teams in the bottom half of the Canada West conference (+13). It’s also their second loss under two points at home this season.

Regina, meanwhile, gets a very important win for the standings. They improve to 3-2 (the Bisons fall to 2-3) and are tied with Saskatchewan (3-2) for second place in Canada West.

Still, there’s a lot of football to be played — as Dobie noted.

“Our guys are excited to go play Calgary, and they’re undefeated. I honestly don’t think our guys think Calgary’s better than them — they happen to be 5-0 and are for sure a good team, but so are we.”

- WITH FILES FROM THE UNIVERSITY OF MANITOBA