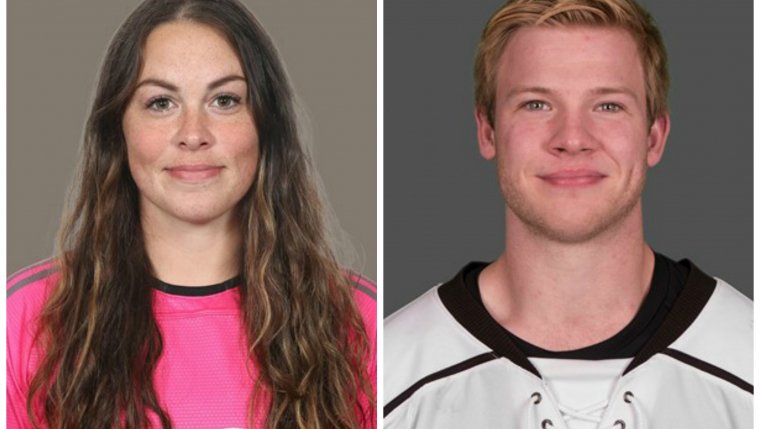 WINNIPEG — Protecting their respective nets, Madison Wilford from women's soccer and Byron Spriggs from men's hockey have been named the Boston Pizza Bison Sports Athletes of the Week for the week ending October 8, 2018.

Two wins against rival Winnipeg is always big. Doing so with two clean sheets, though, gives credit to Manitoba’s fourth-year goalkeeper Madison Wilford, who is having another solid campaign for the Herd.

Wilford had eight combined saves in two games against the Wesmen, as the Bisons shut out Winnipeg 2-0 at Ralph Cantafio Soccer Complex on Thursday, October 4 and 1-0 at Investors Group Field on Saturday, October 6 — the latter counting toward the 28th annual Duckworth Challenge.

On Thursday, Wilford made a pair of exceptional saves on penalty kicks to keep the Wesmen off the sheet. She has now started all ten games for Manitoba this season, with a record of 3-4-2 in those games. Of goalkeepers who have been active for that many games, Wilford is second in Canada West with a 1.16 goals against average.

It was also a milestone weekend for the 5’9”, fourth-year keeper, as her five-save performance on Thursday propelled her into the Canada West top ten for career saves.

Bison women’s soccer now head on the road for two games on the west coast, as they face UBC Okanagan on Saturday, October 13 (3 PM) and Thompson Rivers Wolfpack on Sunday, October 14 (3 PM). Both games are available to watch on CanadaWest.TV.

It was a conference bye for Bison men’s hockey this week, as they made their annual trip south of the border for a pair of games against NCAA opponents.

Facing the North Dakota Fighting Hawks on Saturday, October 6, Bisons fifth-year goalie Byron Spriggs was nothing short of spectacular — making an awesome 52 saves to push UND to the brink. The Fighting Hawks, ranked 11th in the United States, needed overtime to pull off the 3-2 win.

Playing all 63 minutes for the Herd, Spriggs had 17 saves in the first, 13 in the second, 19 in the third, and three in overtime to make up his total. He was named First Star for his performance.

The 6’1” Winnipeg native was voted by his teammates as the Men’s Hockey Team MVP at last year’s Brown & Gold end of year gala.

Bison men’s hockey now return to Canada for their home opener, as they play the Alberta Golden Bears at Wayne Fleming Arena on Friday, October 12 (7 PM) and Saturday, October 13 (7 PM).