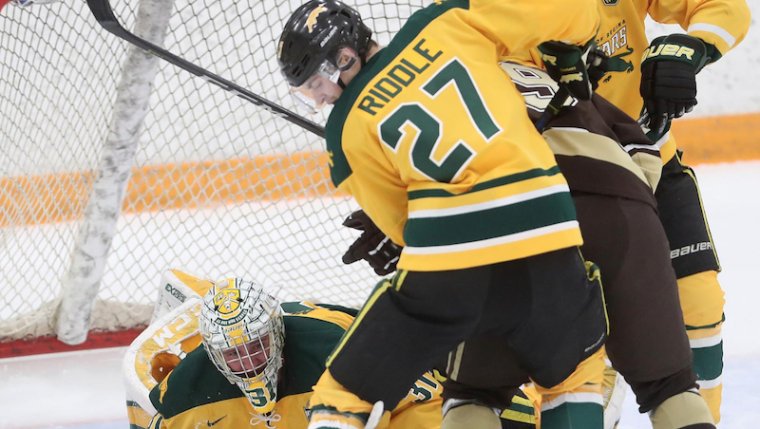 WINNIPEG — A 36-save performance from Dawson MacAuley helped the Regina Cougars to a 3-1 win over the Manitoba Bisons on Friday night at Wayne Fleming Arena.

On top of a stellar performance from both net minders, the game also featured a frenzied pace and tons of team speed on both sides.

“We discussed this as a group on Monday morning, that Regina is in a situation where they were desperate for a win. We were going to get a hard-working, desperate team and we couldn’t afford to underestimate them, and I guess we did tonight,” Bisons head coach Mike Sirant said post game.

“We didn’t play with the same level of compete that we have in previous games. We didn’t play well as a team, and again, we just got away from our identity of who we are.”

The first whistle of the contest didn’t until occur until close to five minutes into the game, and close to 30 combined shots were peppered at Manitoba’s Byron Spriggs and Regina’s Dawson MacAuley in the opening 20 minutes.

The Bisons controlled the majority of the first half of action, utilizing their speed to generate some solid chances. Their best opportunity came on a loose puck in front of the net, however neither Brett Brooks or Thomas Freeman could pot the rebound.

Regina went to the power play just under halfway into the contest, which shifted the momentum to their side and helped them gain some confidence. Rookie forward Tate Coughlin had the squad’s two best chances with the extra man, however Spriggs stopped both of his backhand chances from in tight.

Manitoba got their first power play with seven minutes to go and had a couple of opportunities to open the scoring — the most notable on a shot from the slot from forward Devon Skoleski — however MacAuley was up to the task to keep the score level heading into the first intermission.

Regina opened the second period with the man advantage after a double minor by the Bisons take carried into the middle frame. Forward Tristan Frei had the visitors best chance on an odd-man rush, but his shot clanged off the near post.

Both teams continued to trade opportunities — including another Regina shot by Coughlin that went off the near post — however neither team was able to find the back of the net.

The tides turned in the Cougars side with 6:41 left though, as forward Zach McPhee picked up a pass that had clanged off the boards and beat Spriggs with a wrist shot shorthanded.

Manitoba pressed for the equalizer, and got some spirited energy from rookie Jeremey Leipsic, who was making his first start in the lineup, however his shot from in tight went just wide with two minutes to play.

Regina would then add to their lead shortly after, as rookie Arthur Miller managed to beat Spriggs with a top shelf shot from in tight to give the visitors a two-goal lead entering the third.

The Cougars added to their lead just under two minutes into the third period, as forward Corey Kosloski beat Sprggs after intercepting a puck right in front of the Bisons net.

Manitoba put their foot in the gas right afterwards and were able to solve MacAuley at 4:30, as forward Brett Brooks tapped in a rebound from defenceman Mackenzie Dwyer.

The Bisons would continue to put the pressure on, but couldn’t level the score, as MacAuley made some critical saves late in the contest, including a five-hole stop on forward Zach Franko with 1:39 to go after Manitoba had pulled their goalie.

With the win, Regina advances to 1-3-1, while Manitoba falls to 2-3-0. Both squads will be back at it tomorrow at 2 p.m., looking to finish the weekend off on a high note.