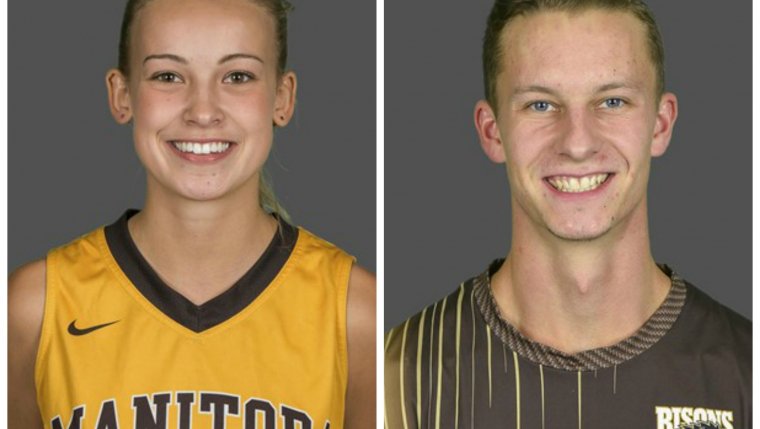 WINNIPEG — Putting up strong numbers in wins for Manitoba, Kevin Negus from men's volleyball and Nicole Konieczny from women's basketball have been named the Boston Pizza Bison Sports Athletes of the Week for the week ending October 29, 2018.

There was the usual home opener energy for Bison men’s volleyball this past weekend, but two wins over MacEwan and a sensational weekend for fourth-year right side Kevin Negusadded an exclamation point.

Manitoba won both matches against the visiting Griffins, doing so in four sets on Saturday, Oct. 27 and in three on Sunday, Oct. 28. Even in just seven sets, though, Negus was able to total 45 kills — propelling him to the top of Canada West in kills per set (4.69).

On Saturday, Negus led Manitoba with 18 kills on 40 attempts, good for a .350 percentage. He added a pair of service aces and three digs to his stat line.

Then, on Sunday, Negus unleashed a torrent of successive attacks to down the Griffins in three sets. Down 19-16 in the third, he had four kills to wrest control back for Manitoba, allowing them to finish the match. The line tells the story: Negus had 26 kills on 42 attempts (.548), adding two service aces and eight digs.

Negus, a native of Sioux Lookout, ON and a student in Kinesiology and Recreation Management, is in his fourth season with the Herd.

The goal for Bison women’s basketball this season has been to improve after a playoff berth in 2017-18. With that in mind, it was an auspicious opening weekend in Brandon, as the Bisons picked up two wins and two great stat lines for their fourth-year guard Nicole Konieczny.

Konieczny racked up 50 points in two games for Manitoba. In Friday’s 97-84 win over the Bobcats, Konieczny had a huge double-double, scoring 30 points and grabbing 16 rebounds. The Regina native shot 11-for-31 from the floor, including 2-for-6 from three and 6-for-9 from the charity stripe.

In Saturday’s 86-61 win, Konieczny added 20 points on 8-for-17 shooting, along with eight rebounds, four assists and a steal.

After one weekend of play, Konieczny’s 25 points per game is second in Canada West, while her 12.0 rebounds are tied for second with two other players. Last season, she averaged 12.2 points on 42 per cent shooting in 20 games for the Herd.

Konieczny, who is a fourth-year studying in the Faculty of Science, arrived at Manitoba from Winston Knoll Collegiate in Regina, Saskatchewan.

Bison women’s basketball will play their home openers this weekend, Nov. 2 (6 PM) and Nov. 3 (5 PM), at Investors Group Athletic Centre as they take on the Mount Royal Cougars.