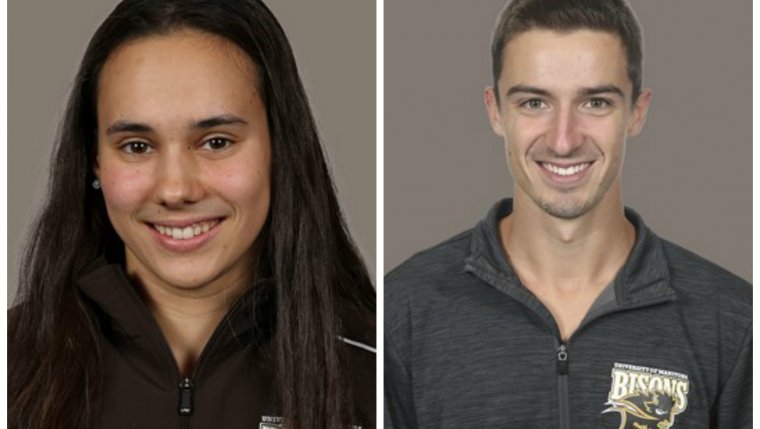 WINNIPEG — After a gold medal weekend at two separate championships, Kelsey Wog from women's swimming and Simon Berube from men's track and field have been named the Boston Pizza Bison Sports Athletes of the Week for the week ending February 26, 2019.

This weekend was the feather in the cap of an outstanding campaign, as third-year swimmer Kelsey Wog finished the 2018-19 season with her best performance yet at nationals.

The Winnipeg native’s time in the 200-metre breaststroke also broke a four-year-old U SPORTS record by over two seconds, as she posted a 2:25.50 and won the event by seven seconds over the nearest competitor.

The performance at nationals completed a season that also saw Wog win four gold medals at the 2018 Canada West Swimming Championships — all three breaststroke events and the 200-metre freestyle.

Bison swimming will compete in the Prairie Winter Invitational at Pan Am Pool, March 7-10. This year’s Canadian Swimming Trials take place in Toronto from April 3-7.

Coming in as one of the top middle-distance runners in the conference, fourth-year Simon Berube didn’t disappoint at the 2019 Canada West Track & Field Championships, finishing with two individual medals and two in the relays.

Berube’s best performance came in the men’s 1000-metre, where he won gold and chased down the conference’s top-ranked athlete at the distance — Regina’s Gregory Hetterley — in the final stretch to win in a season’s best time of 2:27.47.

With a gold medal finish in the 1000-metre, Berube earned First Team All-Star status in Canada West. He also auto-qualifies for the 2019 U SPORTS Track & Field Championships, hosted by the University of Manitoba, in the event.