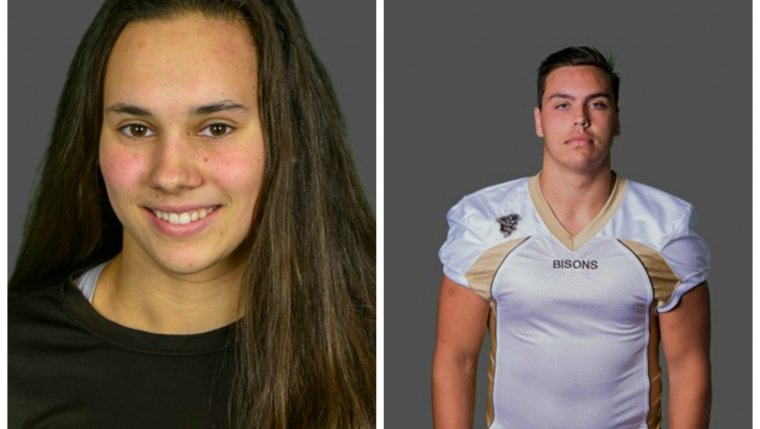 WINNIPEG — Thanks to record-setting numbers over the weekend, Kelsey Wog from women's swimming and Derek Dufault from Bison football have been named the Boston Pizza Bison Sports Athletes of the Week for the week ending November 5, 2018.

The Bison swim teams returned to competitive action against other university squads this weekend, battling it out at the Odlum Brown College Cup – Pacific hosted by UBC. Leading the way for the Herd — and showing plenty of promise for the season to come — was third-year Kelsey Wog.

She totaled five gold medals individually, four of them meet records, and three of those records beating her own mark. The other was in the 200m breaststroke, where she beat the previous mark set in 2014 by almost seven seconds.

The golds were in the 50m, 100m and 200m breaststroke, the 200m individual medley, and the 200m freestyle. Wog also had a silver as a part of the 200m medley relay and a bronze in the 200m freestyle relay, to bring her weekend total to seven medals.

Wog is coming off a stellar off-season, highlighted by her participation in the Pan Pacific Championships in Tokyo, Japan. At last year's U SPORTS Swim Championships, she earned gold in the 50m, 100m, and 200m breaststroke, along with a silver in the 200m individual medley.

The Bison swim teams now look forward to the Bison Sprint IM Invitational, taking place at Pan Am Pool on November 17. The Canada West Swim Championships are in Calgary from November 23-25.

Though Calgary would show their meddle in the second half, the Bison football team showed they weren't going to roll over to the undefeated Dinos early on — led by the play of their defensive line and fourth-year end Derek Dufault.

Dufault, 6'2" and an alumni of the Dakota Lancers, tied a Manitoba Bisons record with three sacks of Hec Crighton favourite Adam Sinagra — all three coming in the first half. Dufault would total seven tackles, six of them solo, in the 37-13 loss to Calgary in the Hardy Cup semi-finals.

Dufault, who is in his CFL draft-eligible year, competed in last summer's 2018 Valero U SPORTS East-West Bowl, a showcase for university players in front of CFL scouts. This regular season, the defensive end totaled 18 tackles (14 solo), three sacks for 22 yards, and 4.5 tackles for loss.