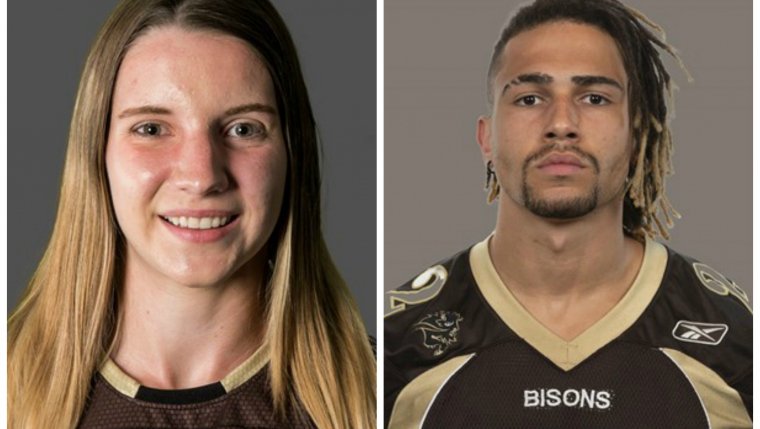 Following their weekend performances, Jamel Lyles from football and Shaylyn Dyck from women's soccer have been named the Boston Pizza Bison Sports Athletes of the Week for the week ending October 15, 2018.

While it wasn't the outcome Bison football was looking for on the road in Calgary, third-year running back Jamel Lyles had an impressive outing against the Dinos.

In a 34-16 loss to the nation's no. 3 ranked Dinos, the Bisons' passing attack struggled to gain momentum. Stepping in was their running game, though, as Lyles ran for a season-high 147 yards and a touchdown on 15 attempts, adding 20 yards receiving and 31 yards on returns for 198 all-purpose yards.

With that performance, Lyles retains his top spot in Canada West for yards per game, averaging 109.0 — the only player marking that stat in triple digits. The touchdown against Calgary was his first of the season, a 17-yard run in the 4th quarter to get Manitoba their first major of the evening.

Lyles, who joined the Bisons from the Westshore Rebels, was the Canada West Rookie of the Year in 2015. This August, he was ranked 16th in the annual CFL Scouting Bureau List, which evaluates the top prospects eligible for next year's CFL Draft.

Bison football are on the road again this weekend, playing the 3-3 Saskatchewan Huskies on Saturday, October 20 at 2 p.m. CST.

Bison women's soccer are riding high. They're now on a four-game win streak and have clinched their spot in the Canada West playoffs. What's more, the four wins have come on four clean sheets — thanks in no small part to the stout play of third-year defender Shaylyn Dyck.

Dyck, who has started in eight games and played in nine for the Bisons this season, was solid as the team's centre back in both matches. The Bisons won 1-0 on Saturday against the UBC Okanagan Heat and 1-0 on Sunday against the Thompson RiversWolfPack.

The matchup on Sunday was especially demanding, as Dyck and the Bisons back four dealt with WolfPack forward Chantal Gammie, who is tied for ninth in scoring in Canada West with six season goals. With consistent pressure shown by Thompson Rivers trying to equalize a 1-0 game in the second half, Dyck was impressive with our on-ball pressure, and able to keep the opponent off the board.

Shaylyn Dyck joined the Bisons during the 2016 season and started every game in her first two seasons with the Herd. She was awarded Defender of the Year and Rookie of the Year by her teammates at the season's end awards banquet.

Bison women's soccer have two more games in their regular season, as they return home to play Saskatchewan on Friday, October 19 (6 PM) and Saturday, October 20 (6 PM) at the West Turf Field. Saturday is also Senior's Night, where the team will celebrate the four graduating players this year.