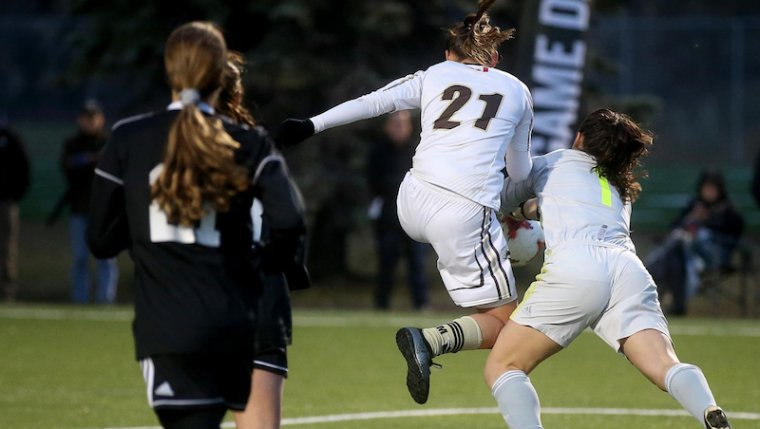 With a game-winner scored just three minutes in, the Saskatchewan Huskies built on an early lead to beat the Manitoba Bisons at the West Turf Field (U of M campus), 3-0 on Friday night.

The win secures a playoff spot for the Huskies, as they improve to 3-6-4 on the season. Manitoba falls to 6-5-2, and sees a four-game win streak snapped.

In a first half marred by light hail, then ten minutes of sleet, the Huskies persevered to get on the board early. Intercepting a pass that defender Shaylyn Dyck intended for keeper Madison Wilford, Huskies midfielder Taneil Gay found herself with open field, tapping in her second goal of the season.

“I just anticipated the ball coming back. I took a chance, it ended up working out,” said Gay. “That definitely set the tone, set the pace for the rest of the game.”

Saskatchewan dominated a lot of possession in the first half, and nearly found the net again in the 19th minute, as a header in the box was wiped away neatly by Bisons defender Haydn Burdeny.

Still, the Huskies were the next to score. In the 43rd minute, with the rain pouring down, midfielder Haley Mercier scored her first of the season off an assist from Maya Gabruch, giving Saskatchewan a 2-0 halftime lead.

They would build on it shortly after the break, as Cassidy Hayward scored her third of the season in the 49th minute thanks to an assist from Kalli Cowles.

Fighting a 3-0 lead, the Bisons were valiant for the rest of the match, earning a lot more possession time and threatening on a few trips to the box. In the end, they were unable to get on the board.

“We really struggled at the beginning. I think we had a really bad start and that put us on our back foot,” said Bisons head coach Vanessa Martinez Lagunas. “In the second half, we played better.”

“Credit to Saskatchewan, they started really intense and they dealt with the weather [well].”

Bison women’s soccer now conclude their regular season with a home match tomorrow night against the Regina Cougars at 6 p.m. The Huskies head across town to play the Winnipeg Wesmen at 7 p.m.