Four-Goal First Propels No. 3 Manitoba to 7-3 Win Over Regina 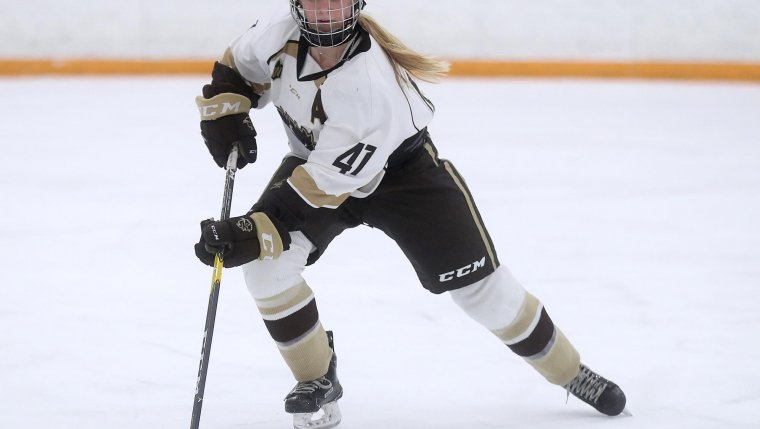 WINNIPEG — Four goals within the first 11 and-a-half minutes of play made the difference on Saturday night at Wayne Fleming Arena, as the No. 3 Manitoba Bisons topped the Regina Cougars 7-3.

The trio of Sheridan Oswald, Jordyn Zacharias and Alanna Sharman combined for five points during Manitoba's opening frame run, after registering four the night before.

Their first tally came at 6:05 during four-on-four play, as forward Zacharias went a tremendous tape-to-tape pass to line mate Sharman, who then flipped it back to her. Zacharias then went forehand-backhand to make the score 1-0.

The conference's best power play then struck with their first of two during the opening 20 minutes, as Sheridan Oswald got her stick on a slap shot from defender Alexandra Anderson to double up the lead.

Oswald made it back-to-back less than a minute later, as Zacharias won a face-off and fed into her in front for a no-doubter.

"I think Sheridan Oswald likes playing with those two [Zacharias and Sharman]," Bisons head coach Sean Fisher said postgame. "They're three great players, they have great chemistry and they play the game the right way. They shared the puck and they were smart with what they did with it on both ends of the ice."

The Bisons would then cap their scoring with 8:30 to go, as forward Lauryn Keen potted a loose puck past Regina goalie Jane Kish.

The Cougars — who came into the series with the second-best power play in the conference — had a few chances but couldn't beat Manitoba goalie Lauren Taraschuk. Their best chance of the opening 20 minutes came two minutes in, as forward Elise Endicott out-raced a Manitoba player to the puck and released a slick wrap-around behind the net that went just wide.

Regina responded quickly in the second period, courtesy of forward Ireland South who beat a screened Taraschuk just over a minute into play.

But the Bisons flipped the momentum back in their favour at 4:48, as fifth-year forward Erin Kucheravy's shot went off a Regina player and in.

That was it for the scoring through 40 minutes, however the post and crossbar certainly had some action.

First, Cougars forward Jenna Merk's wrist shot went off the post six minutes in. Then with six minutes left, Bisons forward Natasha Kostenko saw her shot go high off the crossbar and directly out of the net.

The visitors kept pushing in the third period, getting their second of the game short-handed at 7:24, as Shaelyn Vallotton tapped in a Emma Waldenberger rebound,

But Regina ran into penalty trouble in the final ten minutes, surrounding their third and fourth goals on five-on-three short-handed markers.

Defender Megan Neduzak had the third power play goal for the Bisons just under 12 minutes in on a slap shot, while rookie forward Kaitlyn Chatyrbok had the fourth on a rebound with 6:41 to go.

"Katy, before she went out there made a joke on the bench that she was making her power play debut," Fisher said. "I asked her if she'd been watching film and she said yeah, and got one there on the five-on-three so I was happy for her.

The Cougars would get their third from Waldenbeger with 4:29 left on the power play, but it was too little too late as the Herd came out on top.

With the win, Manitoba advanced to 14-4-2-2 while Regina fell to 7-10-2-3. Next up for the Bisons is a road tilt against Lethbridge while the Cougars will head to Alberta to face the Pandas.