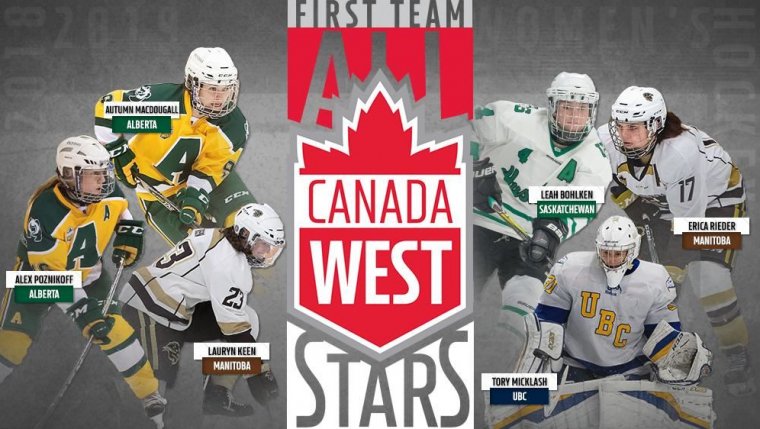 WINNIPEG — The 2018-19 Canada West women’s hockey all-star and all-rookie teams were announced by the conference on Wednesday, with three Manitoba Bisons honoured for their efforts.

Rieder finished the 2018-19 regular season as the leading scorer in Canada West among defencemen, scoring four goals and marking 13 assists for 17 points. Rieder also marked a team-high +27 in plus-minus, which puts her fourth overall and first among defencemen. The Regina native was also team captain.

“Erica has asserted herself as one of the top defencemen in our conference year after year and I am happy that she has been recognized as such,” said Bisons head coach Sean Fisher. “She is a terrific leader both on and off the ice and this is a great recognition in her fifth year.”

Keen, 22, was one of the conference’s top scorers in her fifth season at Manitoba, earning the second conference all-star selection of her Bisons career at the forward position (2016-17: First Team; 2014-15 All-Rookie).

Keen finished the season with 13 goals and 13 assists (26 points), both team-highs for Manitoba and good for fourth in Canada West scoring. Keen’s five power play goals tied the conference lead, while her +16 plus-minus tied for seventh in the conference. The former Canada West Most Outstanding Player (2016-17) also had two power play assists and two shorthanded goals for the Bisons.

“Lauryn had an outstanding year on both sides of the puck,” said Fisher. “She was a threat to score almost every shift and played a terrific 200-foot game. I’m really looking forward to what she brings come playoff time.”

Anderson, 22, also had an outstanding season on the blue line in her fifth campaign at Manitoba, earning the second conference all-star selection of her career at the defence position (2016-17: First-Team).

With five goals and ten assists (15 points), Anderson tied for third in the conference for defencemen scoring. Her +21 plus-minus was second among defencemen and fifth overall in Canada West. The Winnipeg native also tied with four other Bisonswith two game-winning goals during the 2018-19 season.

“Alexandra was very good in her fifth season with Bison women’s hockey,” said Fisher. “She was a force both offensively and defensively and was very effective on special teams as well.”