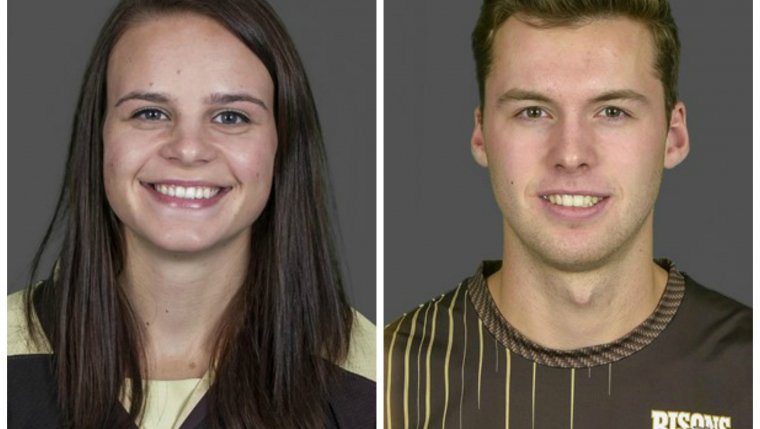 Following their weekend performances, Erica Rieder from women's hockey and Brendan Warren from men's volleyball have been named the Boston Pizza Bison Sports Athletes of the Week for the week ending October 22, 2018.

After a pair of losses to Alberta the week before, it was a weekend to right the ship for women's hockey, and they did just that in two wins over the Regina Cougars. Key in getting the no. 2 ranked Bisons started right was fifth-year defenceman Erica Rieder.

In Friday's 4-2 win at the Co-operators Centre, Rieder was all over the ice — scoring three points (one goal, two assists) to lead the Herd. Rieder scored Manitoba's first goal of the game just 12 seconds into the second period, then followed that up by assisting on Natasha Kostenko's game-winner at 14:29 in the third and a Karissa Kirkup empty-netter at 19:02. Rieder was +4 in the game to lead all players.

Then, in a nail-biting 4-3 shootout win on Saturday, Rieder showed off her ability to strong defensive ability in ten minutes of overtime. With the ice wide open in 4-on-4, then 3-on-3 play, Rieder and the Bisons were able to hold the Cougars to just one shot in the extra frames.

Rieder, who was a U SPORTS Second Team All-Canadian in 2017-18, is now tied for third in defencemen points (3) in Canada West and is a captain of the Bisons this season.

The no. 2 ranked Bison women's hockey return home for a pair of games against the Mount Royal Cougars on October 27 (7 p.m.) and October 28 (2 p.m.) at the Wayne Fleming Arena.

A pair of losses to open the season in Mount Royal was disappointing for Bison men's volleyball, but their young core showed plenty of potential for wins to come — with second-year middle Brendan Warren standing out.

Warren, who led the Canada West conference in blocks last season (112), got started on a similarly torrid pace. In Friday's four-set loss to the Cougars, Warren had four total blocks, four kills, two service aces, and a dig for 8.5 points.

On Saturday, Manitoba lost in a marathon five-setter to the Cougars, but Warren was even more dominant, recording nine total blocks — a game high for the young Canada West season — adding seven kills, one service ace, and a dig for 12.5 points.

The 13 total blocks put him one back of the best weekend in the conference, as Warren will look to continue his strong play next weekend in Manitoba's home opener. The 6'6" middle joined the Bisons from 204 Volleyball Club and is in general studies.