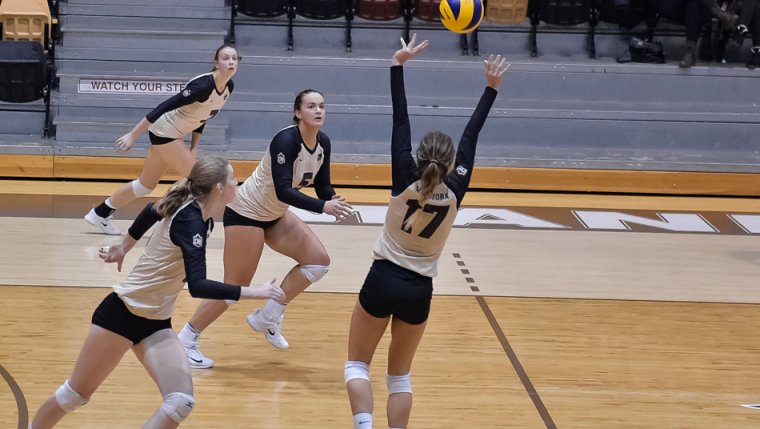 WINNIPEG — The Bison women’s volleyball team introduces eight new recruits for the 2019 - 2020 season, seven of them from Manitoba.

The team will officially introduce the class, along with 2018-19 first-year Jordan Hamm, at a press conference this Thursday, September 13.

“This class brings a combination of physicality, skill, athletic ability, unprecedented success, and a clear understanding of the work required to be one of the top U SPORTS teams in the country,” said women’s volleyball coach Ken Bentley, in his 32nd season.

“This class will follow right behind our current group that is now growing into a very strong, mature, and tremendously fit team. The 2019 recruiting class will have the benefit of learning from our current group with respect to how they train, prepare, and compete at the top level in Canada. They are perfectly positioned for future success.”

Bentley, 17, is a 5’4” setter from Winnipeg, who played club for the Junior Bisons. Bentley has sensational individual accolades, including being the MHSAA Provincial MVP in 2016-17 and 2017-18. She was also a Provincial Club All-Star in those seasons, and a National Club MVP in 2017-18. Her CJS teams were provincial champions in MHSAA AAAA varsity this past season, and champions of junior varsity the two years preceding. She has also been an honour roll student from grade nine to 11.

“It has been a treat to have coached Katreena, along with Jordan [Hamm], Julia [Arnold], and Light [Uchechukwu] for all of these past years,” said Ken Bentley. “Katreena has been a part of my teams since she was in a car seat. She found her own passion for the game and we have been able to experience it together with some exceptional club teams and performances over the last seven years.”

“She has earned all of these performances with commitment and dedication to her sport, culminating with her selection to the Canadian Junior National Team this past summer, after having gotten cut the previous summer. Katreena’s understanding of the game as a setter is exceptional, and she knows how important the consistency of her performances have to be for her teams to be successful.”

“I’ve coached Light for the past four years and came to see pretty quickly that she would be one of the top athletes I have coached in a number of years,” said Bentley. “I do believe she can play at the top level in Canada West, but she can also play at a national team level. She is certainly one of the top athletes graduating in 2019 in Manitoba, and she has the ability to have an impact with our team before too long. I am really excited to continue coaching Light throughout her university career knowing full well the potential she has to play at such a high level.”

Arnold, 17, is a 5’7” libero from Winnipeg, who played club with the Junior Bisons. Alongside Katreena Bentley, Arnold’s College Jeanne-Sauvé high school team were champions in junior varsity in 2015-16 and 2016-17, and champions in varsity in 2017-18. Arnold was named a provincial high school All-Star the last two seasons at CJS. With the Junior Bisons, she has been co-captain for both the 14U and 17U teams.

“Julia has been an integral part of the unprecedented success of the Junior Bisons program since she began playing club volleyball at age 11 beside Katreena, Jordan, and Light,” said Bentley. “Julia has been one of the pillars of this group and their club success by virtue of her outstanding level of skill, court play, and leadership. She has also been a key component with the success of CJS and their success the past three seasons. Julia possesses the work ethic, the drive, and the competitive nature to play at the Canada West and U SPORTS level.”

Spencer, 17, is a 6’3” middle from Bloomington, Minnesota, where she played club for the Mizuno Northern Lights. Spencer was 14th in the state in total blocks during the 2017 season, and her other individual accolades include being ranked one of the top 65 juniors in Minnesota during 2016. A captain of her varsity team in 2017 and 2018, Spencer’s Thomas Jefferson high school team were conference champions and regional runner-ups in 2016. Spencer is a dual citizen, with both parents from Winnipeg.

“While on my research/study leave in 2016, I first met Jaidyn’s mom at a club tournament in Minneapolis while coaching my club team, and found out about their Winnipeg roots,” said Bentley. “From that point forward, I began the process of recruiting Jaidyn, and we played against her team on several occasions with our club team, and I quickly saw how good she could be for our program. She has played for the highly regarded Northern Lights Club Program for a number of years and this has contributed substantially to her development.”

“Jaidyn is a physical presence, and an impact player as a middle blocker. She knows the position well and has trained and played at a high level with her club team for a number of years so her adjustment to our level of play should be smooth.”

Gurney, 17, is a 5’11” middle joining the Bisons from East Selkirk, Manitoba, where she plays for Lord Selkirk Regional Comprehensive. A multi-sport athlete — including track, volleyball, and hockey — Gurney has plenty of individual accolades, including being named the MVP of St. Mary’s tournament in 2016-17 and being on the provincial All-Star team for her Dynamo club season in 2017. Gurney has also earned silver medals at the 16U Club Volleyball Provincials and Western Nationals in 2017, and her Lord Selkirk team made MHSAA provincials Final 4 this past spring.

“Asha is an exceptional student-athlete and her commitment to both her academic pursuits and athletic excellence fits perfectly with our program,” said Bentley. “A multi-sport athlete, Asha could have easily chosen another sport over volleyball. She is a dynamic athlete and has only scraped the surface of her volleyball potential.”

Crevier, 17, is a 5’11” middle from Portage la Prairie, Manitoba, who played club with the Junior Bisons. Also a multi-sport athlete in high school, playing basketball, volleyball, cross country, and track, Crevier’s athleticism has helped her teams succeed — the PCI Varsity Saints were AAAA finalists in 2017, while her Junior Bison U18 team finished second in the Best of the West tournament this year.

“Simone comes to us as another outstanding multi-sport athlete and student. She joined our club program last season and showed tremendous progress under our 18U coach, Joe Moore,” said Bentley. “This past summer she gained some excellent experience as part of the Team Manitoba squad that competed in Tulsa at the US High Performance Championships. Simone is an extremely dedicated student-athlete who has the capacity to compete at our level, and I am really excited to see her explore her full potential with our team.”

“Keziah has steadily developed with our club program throughout her time with us,” said Bentley. “She is an exceptional athlete with a great jump and with continued training her ability will continue to grow. Keziah is also a high performer in the classroom, and a leader in her school, and will fit in perfectly with our team. I’m really excited to see Keziah develop with our program over the next five years.”

Schuster, 17, is a 6’0” right side from Winnipeg, who played high school volleyball at River East Collegiate and club with the Junior Bisons. On the gold team, Schuster was also a member of Bentley’s provincial and national champion team in 2018. With River East, she had a provincial varsity top eight finish in 2018 and a top ten finish in 2017.

“We discovered Olivia at one of our summer camps and she joined our club team at the 16U level, and she has been with us ever since,” said Bentley. “Last year, Olivia spent a great deal of her club season on a student exchange in Hamburg, Germany — a tremendous opportunity for Olivia to gain a further appreciation for the German culture and to perfect her German language skills. Olivia is a big, strong physical athlete that possesses the tools to play at the net in Canada West. We look forward to her continued development with our program.”